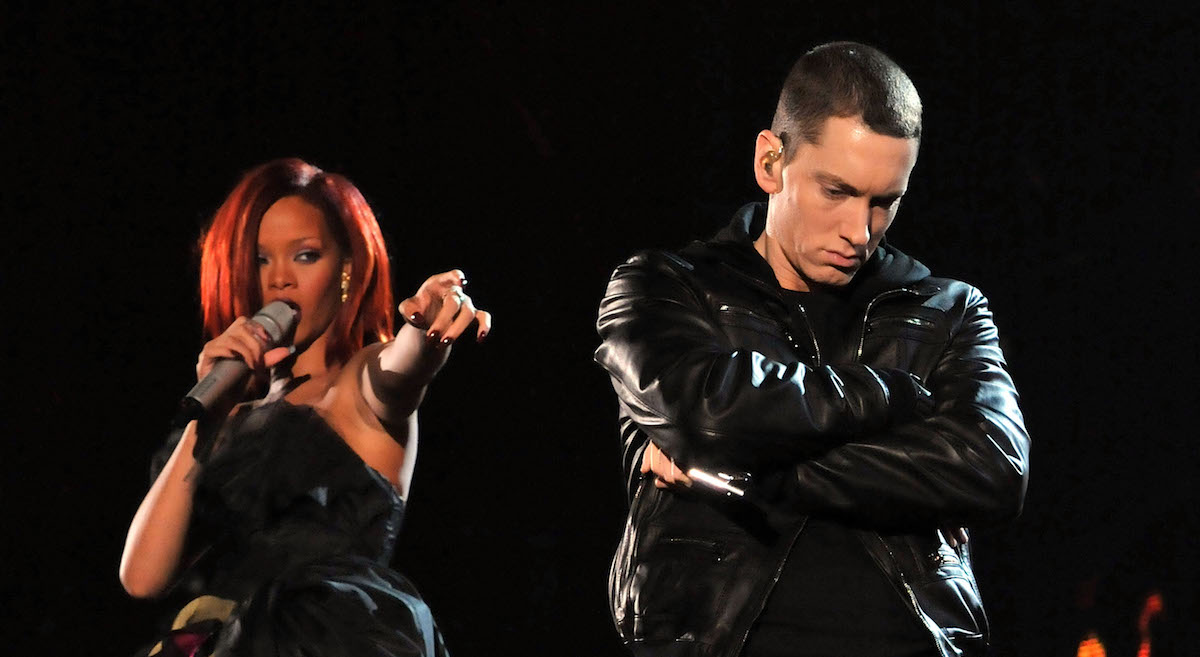 Eminem is making amends. The rapper has said a lot of controversial, incendiary things over the years, but many believe that he went a touch too far in one of his verses from a song recorded in 2009. The song may have been unreleased, but when it leaked back in 2019, questions were raised over Eminem’s character.

The Michigan-born artist has built an illustrious career out of making light of serious situations. His songs have always pushed boundaries, either through obscenely violent lyrics or by name-dropping celebrities and making a mockery out of their personal lives. It’s very much been his ‘status quo,’ but it turns out there are specific lyrics that he’ll actually apologize for.

One such lyric discussed Rihanna’s assault by Chris Brown. The incident was the talk of the town in the 2008-2010 era, so of course, Eminem jumped on the opportunity to make references to it.

It took a decade, but Eminem is apologizing for his actions. His decision to examine his previous behaviour is noteworthy in many ways, but we also can’t forget that Rihanna’s abuse was used as a punchline for too many people. The fact that she chose to process it on her own terms and move forward with confidence speaks to her strength and resilience. Here’s what we can learn from Eminem’s apology in connection to Rihanna’s trauma:

The original lyrics are not for the faint-hearted. According to Entertainment Tonight, the leaked verse went like this: “Of course I side with Chris Brown / I’d beat a b*tch down too.”

Anyone who is familiar with Eminem’s sound will not be surprised by his misogynistic lyrics. But what’s more shocking about these words is that he appears to unambiguously side with Chris Brown and seems to justify his attack on Rihanna for no reason. For a public figure as influential as Eminem to be adding fuel to the fire is not a good look at all.

What’s worse is that he went on to work with Rihanna afterward on many occasions, such as their hit songs ‘Love The Way You Lie’ and ‘Monster.’ But, of course, since the original song was unreleased, nobody ever caught wind of Eminem’s horrifying lyric. That is until it was leaked in 2019, at which point Eminem rightfully received backlash for his choice words.

However, Eminem took accountability instead of riding out the backlash. In his latest song, ‘Zeus,’ from his latest collection, Music To Be Murdered By: Side B, Eminem directly apologized to Rihanna for crafting the lyric in the first place. His apology lyrics were such:

Long as I re-promise to be honest / And wholeheartedly, apologies, Rihanna / For that song that leaked / I’m sorry, Ri / It wasn’t meant to cause you grief / Regardless, it was wrong of me.

Eminem on Music To Be Murdered By: Side B

He didn’t just apologize via song; he went on a radio show and elaborated on the whole situation. Saying that he was under the influence of drugs at the time, he never intended for the song to hurt anyone. He was “caught off-guard” when he heard of the leak and, at first, had “zero recollection” of writing the verse.

It’s 10 plus years old, but I’m not making excuses for it. I said it and I was wrong for saying that, it was f*cking stupid.

Eminem added that this was written around the time that he was still struggling with his sobriety and learning how to rap again. Therefore, he was playing around with words and went for lyrics that only “rhymed.” Yet, he still admits that he should have thought better.

His admission doesn’t exonerate him from the criticisms, but it’s still worth acknowledging that people do change and that they do have the ability to turn their lives around and make amends with people they’ve hurt. Over the years, Eminem has learned what it means to be there for his daughters, what it means to be a positive role model, and how to use his voice for change, not shock.

Rihanna hasn’t publicly responded to either Eminem’s leaked verse or his apology, but there is a reason why: she’s simply tired of reliving her trauma over and over again in the spotlight. In a 2015 Vanity Fair interview, the singer said that the media has made a meal out of her assault and that she didn’t necessarily sign up to be a spokeswoman for women or men suffering from domestic abuse.

When the public and the media continue to run stories about it and attempt to examine her actions regarding her assault, she feels like she’s getting punished for it. Therefore, she does her best not to think or remember the past, but at the same time, she understands the seriousness of the situation and doesn’t think it’s a good idea to sweep it under the rug. It happened to her, and it was real, but she’s also ready to leave it in the rearview mirror and move on even if the rest of the world decides to trivialize her trauma.

For me, and anyone who’s been a victim of domestic abuse, nobody wants to even remember it. Nobody even wants to admit it. So to talk about it and say it once, much less 200 times, is like … I have to be punished for it?

In the same interview, Rihanna also sang praises of Eminem. She called him one of her “favourite people” and commended his approach to fatherhood and music. She also said that she felt honoured when he asked her to be a part of his record and that he’s one of the most prestigious, eminent rappers of his generation. She added that collaborating on ‘Love The Way You Lie’ was a cathartic experience for her as it also dealt with a dysfunctional, violent relationship. She thanked Eminem for letting her use music to say what she couldn’t “say to the world at the time.”

[Eminem] got so many layers, and he’s such a good person—focused, disciplined.

It’s never too late to apologize and make amends

It’s clear from both their accounts that Eminem and Rihanna share a special relationship. It’s difficult to speculate where their relationship stands today, but it’s undeniable that both have a massive amount of respect for one another. Eminem, the musical provocateur, possesses the ability to take accountability for his actions and issue apologies, regardless of whether they would be received well. Maintaining his integrity is much more important to him than feeding his ego.

We also make grave mistakes in our lives that we might not be able to explain or justify. More often than not, it’s better to apologize than to sit and let the guilt eat away at you. It’s up to the other person if your apology is worth forgiveness, but at least you’ve done your part from your end.

Parents issue warning after teen dies from inhaling aerosol deodorant
This Year, Let Go Of The People Who Aren’t Ready To Love You
Detroit Couple Turn Vacant Lots to Bee Farms – Including the Childhood Home of One Legendary Rap Superstar
‘Gen Z yellow’: Next ‘it’ colour or marketing ploy?
It Takes One Person To Make You Feel Like You Matter | Kyle Scheele Inspirational Speech | Goalcast