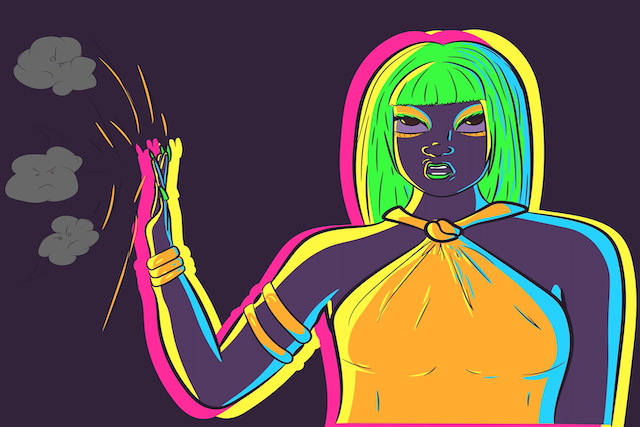 “The ad was a misprint. We can’t offer you any monetary compensation for your writing, maybe dog treats.”

This is an actual response from a successful animal-themed magazine I was going to write for. This letter went on to say that if my love for animals exceeded my need for money, then they would be happy to have me write for them, which I took as a personal offense since I am a huge animal lover.

You can’t make this stuff up!

With experiences like these, I am no stranger to feeling devalued in my career, and I have a hard time accepting a lack of consideration and respect. Case in point…

Another magazine responded that they were interested in a particular piece I wrote, then proceeded to drop communication. Dozens of follow-ups went unanswered until the one day I had enough. I felt so disrespected, as if I didn’t matter enough to at least receive a response. I wrote a type of letter I had never written before to this magazine, and in turn, I learned a hard life lesson.

My email detailed how disappointed I was in the lack of etiquette from the people who ran this once-favorite magazine of mine.

I had let my anger build in true Sagittarian form and let out my storm of personal truth.

I received a response!

The editor apologized and forwarded this angry email onto the person above her, but guess what happened next?

I tried submitting again, and again, even recently, again!

I am convinced that they have purposely ceased communication with me now.

While the way I was raised and what I believe to be basic human decency justify this act of standing up for myself, all it really did to this person with different values, I’m sure, is make me look immature and emotional. And I imagine I burned a possible bridge.

Now I realize that, regardless of what I did, they may have continued to handle their submissions with the same disregard, but after the initial, indignant warrior high, I had nothing but regret.

What I learned is that in many situations, standing up and fighting for acknowledgement isn’t necessarily the wisest action.

This of course depends on the situation.

In this situation, I should have simply moved on instead of taking it so personally and allowing this one encounter to take up so much energy in my heart and fill my being with negativity.

There’s also nowhere to move forward when you’re living within the emotion of anger and hurt. All I did is get myself worked up over something that was beyond my control. And I failed to look at the situation objectively and consider the many reasons why they may not have responded to my emails.

I was also disrespecting myself by putting so much hope, belief, and self-identification into what, at the end of the day, is a business. There’s truth to the line, “It’s business, not personal,” yet I never seemed to grasp that enough to create emotional separation, which is what I do now.

Maybe my emails truly did get lost in the shuffle. Maybe the editor had something going on in their personal life that was overwhelming and they simply didn’t need this submission. Maybe my email was just one email too many. Maybe they’re understaffed and often far behind with emails. I can’t possibly know what’s really going on in someone else’s mind or life, and that’s the way I need to look at these situations to move on with grace.

This world is made up of many different people with different priorities and life situations. I learned that there is nothing wrong with sticking to my values and asserting myself, but it doesn’t help anything to challenge someone who is coming from a different world than my own.

Now, I ask myself…

Is standing up, speaking up, worth burning a bridge?

I think about the other person’s life and workload, and where they may be coming from, not to justify, but to understand.

I journal or create art to let the hurt out.

I exercise the frustration and inevitable lack of closure out from my body.

“Sleeping on it” also has great value, as well as genuine quiet contemplation time.

A lot of times standing up against personal injustice doesn’t change the inflictor, but it will always change you, for better or worse.

At least that is what I have found.

Most of all, if being vulnerable with someone makes me feel horrible in my own skin because they clearly hold different values, I now walk away. I simply try to acknowledge the difference in character and move forward on my own path.

These experiences continue to crop up in different forms, and I believe have changed me for the better. People who have broken my spirit by devaluing and ignoring me have actually led me to having more empathy. I have the desire to reach out to people more because I have observed what a lack of human acknowledgement can do to a person.

I am by no means perfect—none of us are—but I promise myself that I will always get back to people in a timely manner because I know what it’s like to feel disregarded and unimportant.

I am deeply in tune to other people’s pain, which at times can make me feel unbelievably heavy but somehow creates a profound desire in me to reach out with as much love as possible.

I also really appreciate people who do respond to emails, letters, phone calls. These people remind me of who I want to be and also remind me that I get to choose who I align myself with in my personal and professional life.

I learned a lot from the times that I have acted out from my own opinions and values.

I learned that pushing my perspective on someone else often creates more harm, and in most cases won’t change how they view a particular situation. They may forever be on the opposite side of that long, thick tug-of-war rope.

Sometimes I think it’s better to let go, turn away, and face forward to the people and life that you desire. If the bridge is broken, don’t burn it, you never know, but don’t try climbing onto it because then you will inevitably fall and lose yourself in the process.

I say, continue to hold true to your values and stances and spread love by living them instead of spreading animosity by insisting on obtaining justice from those who don’t share the same life views.

Finally, keep seeking out your people, your friends who would never ignore or purposely disrespect you, because those people will reinforce to you that you deserve attention and acknowledgement, whether everyone values you or not.

New Barbie Doll Honours First Black Aviator — Inspires Youth to Take to the Skies (PHOTOS)
How a social media group dubbed Mom Jeans is helping people fight inflation
If You’re Feeling Judged: One Thing You Need to Understand
How to Show Up When Nothing About Your Life Is Perfect
Service Dog Stays at Hospital With His Owner 24/7 — While Nobody Else Was Allowed to Stay