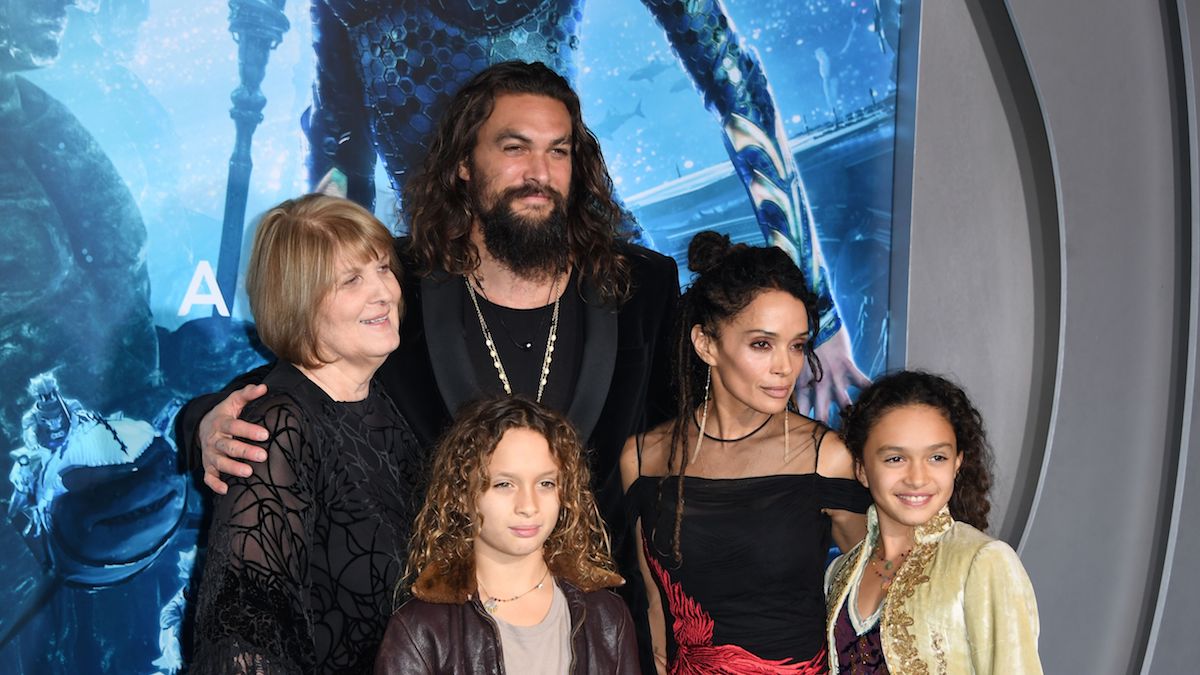 Jason Momoa is a bonafide Internet Boyfriend. That is to say that the majority of the internet has fallen head over heels in love with every bit of persona.

The actor has been in the entertainment game for well over a decade, but it wasn’t until quite recently that the public and press started following him closely. Due to his roles in Game of Thrones and Aquaman, he’s built a reputation for playing tough, resilient, but occasionally vulnerable characters. But as it turns out, his real-life personality isn’t too far from his on-screen characters, sans the mass-murder, the violence, and the superhero powers, of course.

Jason’s simultaneously kind and resolute, tender and powerful, vulnerable and brawny — he is basically the ideal embodiment of modern masculinity. The relationship he maintains with his wife Lisa Bonet, his two kids Nakoa-Wolf and Lola, his step-daughter Zoe Kravtiz, as well as his wife’s ex-husband Lenny Kravtiz, exemplifies his passion for family from top to bottom.

Yet, this wasn’t always the case for him. Jason Momoa had to overcome a world of fear to step up to the plate as a father and a husband. Here’s what occurred in his past to make him hesitant in the first place:

Jason Momoa was famously born in Honolulu, Hawaii, on August 1, 1979. His parents split up when he was young, so he and his mother, Coni Lemke, moved to Norwalk, Iowa. Though he was primarily raised in Iowa, Jason did go back to Hawaii frequently as an adolescent to try to spend time with his father, Joseph Momoa. Yet, the time spent with his father wasn’t enough, and ultimately, it sowed seeds of doubt about fatherhood and responsibility into Jason’s mind.

As a result of having a mixed-race background, Jason was a victim of bullying and social ostracization in both Hawaii and Iowa. In Iowa, the kids on the playground just couldn’t process the fact that he looked different than them, so they took it out on him and beat up young Jason at will. Whereas, in Hawaii, the Indigenous community perceived him as an outsider from the mainland who just didn’t fit in with his father’s family. As he got older, his interest in art, fashion, and skateboarding also made him a massive outlier, subjecting him to further intimidation.

I’m definitely a product of two very opposite worlds. I got beat up a lot. Just for being slightly different—it was gnarly.

Yet, it was becoming obvious that Jason had hit the genetic lottery. His striking good looks, confidence, and poise earned him the attention of many a modeling and acting scout in Hawaii, which he capitalized on to snag himself a role on Baywatch: Hawaii.

Due to his own upbringing, he “didn’t know what it takes to be a dad”

Jason was doing bit parts in movies in the mid-2000s when he met his future wife, Lisa Bonet. They were introduced via mutual friends at a jazz club in New York City and started becoming romantically involved pretty immediately. Jason revealed years later that he had actually had a crush on Lisa since he was eight years old and had made it a personal mission to get to know her one day.

We just happened to be in the right place at the right time […]  I had fireworks going off inside, man. I convinced her to take me home, because I was living in a hotel.

Jason Momoa on The Late Late Show with James Corden

The two had an unofficial wedding ceremony in 2007 and welcomed children not long after. Their oldest, daughter Lola, was born in July 2007, whereas their son, Nakoa-Wolf, was born in December 2008. This was baby number two and three for Lisa as she had already welcomed daughter Zoe with singer Lenny Kravitz nearly two decades prior.

Jason revealed that he was initially terrified of being a father since he hadn’t gotten to spend a lot of time with his own father. It is unclear why his father Joseph wasn’t around much, but Jason indeed interpreted his absence as a cautionary tale for his journey. “I didn’t know what it takes to be a dad. And I don’t want to just tell my son, ‘Because I said so,’” shared Jason when asked about his initial thought process while becoming a father.

Over time, Jason realized that he didn’t want to repeat his father’s mistakes with his own children, particularly his son Wolf. Therefore, he set about taking a vastly different approach his Wolf and Lola. He is concerned about forging a true connection with his own children, one that’s based on learning, growing, and being emotionally expressive. He doesn’t just want to chastise them when they make mistakes; he wants to take the time to get to the root of their mistakes and work through them in a gentle, understanding way. It doesn’t mean that he won’t discipline them when required, but most of the time, their physical and mental wellbeing remains his topmost priority.

I really want to connect, and I want him to be vulnerable and open. I mean, I’m a warrior, and I will lay it down. But I’m also the first one to say, ‘I have a lot of problems, and I want to be able to correct those problems.’

His passion for fatherhood is so immense that he’s gone on record saying that he was “wasting time” before being a father. “I think I was pretty reckless and definitely a bit out of control. Now I’m more focused,” Jason said to Men’s Health. His love for his family also propels him to take better care of himself just so he can “stick around” for his children more.

Even Lisa is full of praises for her husband’s parenting attitude. In an interview with Porter, Lisa said that Jason has all areas covered when it comes to being a super-dad. He’s got superb leadership acumen, just the right balance of tough love and soft indulgence, and a tremendous amount of energy and charm. She also said that Jason’s mindset about fatherhood stands in stark contrast to that of her own father, so it’s delightful to see that both Jason and Lisa have taken note of their own past to help build a more peaceful future for their children.

What’s cool about Jason is that he’s an alpha male who stands for love and family […] Jason embodies a rare form of masculinity in this day and age – he’s a leader; he’s generous. Just in terms of charisma, physique, the right use of power, responsibility, work ethic, you can go down the line.

On top of being a thoughtful dad, Jason is also a lovable step-dad, judging from Zoe’s delightful posts on Instagram. Both step-father and step-daughter are routinely shown conveying affection for one another, be it birthdays, movie premieres, or just random hangouts at their home. The same goes for Jason’s dynamic with Lisa’s ex Lenny Kravitz — the two have gone against the grain to befriend each other and call each other “brothers” multiple times. Who says a blended family can’t do wonders in this day and age?

Being a good parent is all about intention

There is no one-size-fits-all solution to being a parent. As a guy in his twenties, Jason had next to no exposure to what being a father entailed. His father was in and out of his life, so naturally, he didn’t have any confidence in himself when it came to fatherhood. But what he lacked in experience, he made up with intention and effort. It’s your drive to be a good parent that’s going to set you apart and help you raise children with kindness and empathy. We all have parents we wish had taken a different approach regarding our upbringing, but we can’t change the past.

Yet, the keys to the future still lie in our hands. We have to take those disappointments and insecurities from the past and vow not to make the same mistakes. You’ll make your own mistakes, no doubt, but as long as you’re trying to be a good parent, you’re doing a splendid job as it is.

Tough Times Don’t Last (Official Music Video) Fearless Motivation
How a social media group dubbed Mom Jeans is helping people fight inflation
‘It was my heart’: Women with heart disease face barriers to care in Canada, report says
How to Show Up When Nothing About Your Life Is Perfect
The World’s Best Blind Mountain Biker | Brian Bushway | #shorts