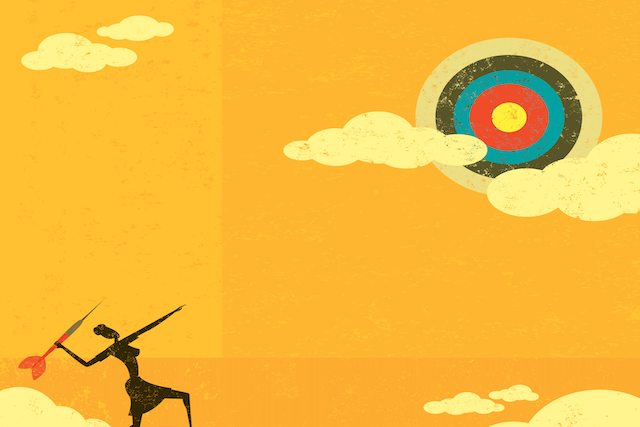 If you pull up any popular motivational video today, you’ll probably hear things like “Set big goals!” and “Aim high and don’t stop until you get there!”

After watching a video like this, you may get inspired and start mapping out your plan to leave the 99 percent in the dust.

And typically, because you’re riding a wave of motivation, you’ll write out these monstrous, Mount-Everest-like goals. These goals paint a picture of your life that is so exciting that you can’t wait to wake up and get to work the next morning. But when you roll out of bed and take a look at the goals you set the day before, reality hits you like a truck.

So instead, you choose the path of least resistance. You retreat to the comfortable and the familiar, and then decide that you’re going to wait “just one more day.” One day turns into two, two days turn into weeks, and weeks turn into months.

But luckily, time heals all wounds, and six months later you get another surge of motivation and try it all over again. This is where most people find themselves in life—stuck on the self-improvement hamster wheel.

How do you stop this vicious cycle? What’s the best way to facilitate lifestyle changes that you actually stick to?

How Big Goals Ruined My Life

When I was a sophomore in high school, I had ambitions to become an NBA basketball player. Despite the fact that I was 5 feet 6 inches tall, had below average quickness, and could barely jump over a stack of books, I was determined to prove everyone wrong.

At this point, I didn’t have my driver’s license yet, so my wonderful mother would get up at 4:30 a.m. and drive me to my school gym early enough to get up shots before class. To make a long story short, I was cut from the team a few months into my sophomore year, and my NBA aspirations died right then and there.

When I was a freshman in college, my focus had shifted to day trading the stock market. Once again, I had complete confidence that I was going to turn day trading into a full-time income. And once again, I was wrong. The $1,000 I had deposited into my Robinhood account disappeared in about two months, leaving me with no financial flexibility to invest into my dream of becoming a full-time day trader.

During my sophomore year of college, I made the biggest decision I had ever made in my life up to that point. Despite having good grades, I decided to drop out of school and start my own marketing agency. Let me tell you, that phone call with my parents is undoubtedly the most emotional conversation I’ve ever had in my life.

I even distinctly remember my own cousin telling me, “I think that you’re going to regret this decision for the rest of your life.” Still, I was unbothered, because I knew in my heart that I needed to give this a shot. A month after telling my parents I wanted to drop out of school, I was on a flight back home to California.

Yet again, I found myself in a familiar spot—just a kid following his heart with some colossal goals.

Filled with passion and drive, I set myself a goal to build the agency to $50,000/month in revenue by the following year. To reach that goal, I committed to at least two hours per day of prospecting, and another two hours of educating myself on the real estate marketing industry.

By now, I think you can see where this is going. For fifteen months, I worked at trying to achieve my goals, but the highest monthly revenue target I was able to achieve was a measly $6,000/month. Despite desperately wanting to taste wealth and success, I had failed yet again.

It was at this point in my life where I really took a step back and engaged in deep reflection. After all, I had just been following the wisdom that successful people had been preaching for decades—set big goals and don’t stop working until you accomplish them.

Was it me that was a failure or was it my system? Why is it that so many people including me continually set big goals that they never accomplish? Pondering these questions drove me to explore the world of self-development.

The Power of Identity

I had always been passionate about self-improvement, but I had never really delved into the science and research behind what actually facilitates true behavior change. My research eventually led me to reach two life-changing conclusions:

After spending hundreds of hours combing through research on habits, behavior change, and neuroscience, I finally had the “aha” moment that shifted my entire perspective on life. The fatal problem with setting big goals is that they focus on the outcomes we want to achieve as opposed to the type of person we want to become.

The most powerful force in the human body is the desire to be consistent with who we’ve been in the past. Behavior that is incongruent with the self will not last, which is why big goals are often so hard to accomplish.

You may have a goal to build a million-dollar business, but if your identity is that of someone who procrastinates on important work, it’s unlikely you’re ever going to hit that goal. You may have a goal to lose weight, but if your identity is consistent with someone who eats fast food regularly and lives a sedentary lifestyle, you’ll continue to be pulled toward actions that sabotage your weight-loss goals.

You may have some new goals, but you still haven’t changed who you are. I wanted to build a marketing agency even though I was the type of person who procrastinated and refused to get out of my comfort zone. It was the inability to change those underlying beliefs that ultimately led to my failure.

How to Achieve Your Biggest Goals by Thinking Small

If big goals aren’t the answer, then what is? The key is to focus on who you want to be as opposed to the outcomes you want to achieve. You need to become the type of person who can reach the standards you have set for yourself.

Your identity emerges out of your daily habits. You don’t come out of the womb with a preset identity. Whoever you are right now is a direct result of the daily habits that you’ve developed up to this point.

In order to start forming new beliefs about yourself, you need to start building new habits. The formula for changing your identity is a simple two-step process:

First off, you have to decide what kind of person you want to be. When setting goals, most people are guided by the question “What do I want to achieve?” Instead, try asking yourself, “Who is the type of person that can get the kind of outcomes I want?”

The beauty of focusing on identity change is that your success is no longer tied to arbitrary targets. Let’s say that you set a goal to lose fifty pounds in six months. As you pursue this goal, you start walking every day and improve your diet. At the end of six months, you step on the scale and you’ve lost thirty-seven pounds.

Did you achieve your goal? Nope, you’re thirteen pounds short. However, what if your goal was simply to become a healthy individual? Did you achieve that goal? Absolutely!

Once you’ve figured out what kind of person you want to become, the next step is to commit to small shifts in your daily behavior. Too often we convince ourselves that massive success requires massive action. This is the principle that guided my life for nineteen years.

Through constant trial and error, I’ve realized that true behavior change is the product of small, incremental changes compounded over time. We tend to dismiss the effectiveness of small actions because they don’t make an immediate impact.

If you walk for two minutes per day for a week, you’re not going to see the number on the scale move much. If you meditate for sixty seconds for a few days in a row, you’re not going to turn into the Dalai Lama. However, what you will do is to give your brain concrete evidence that you’re a different person.

James Clear puts this beautifully when he says, “Every action you take is a vote for the type of person you want to become. No single instance will transform your beliefs, but as the votes build up, so does evidence of your new identity.”

Once you’ve nailed down your desired identity, come up with a daily habit that you can perform no matter how you feel. When you set big goals, your brain tricks you into thinking that the present level of motivation you feel will carry over to when it’s time to take action. By focusing on shrinking your daily targets, you’re taking motivation and willpower out of the equation.

Here’s a few practical examples of this concept in action:

It really doesn’t matter how successful you are right now, all that matters is that you’re on the right path. Once these small habits are solidified into your daily life, you’ll have mastered the art of showing up and acting in alignment with your desired identity.

Since your brain now has some new evidence, you’ll be able to stretch yourself and gradually aim higher. That’s the true power of small habits. The same way that money multiplies through compound interest, the positive effects of your habits multiply as they become a part of who you are.

So, the next time you get motivated to change your life, forget setting huge goals. If you do this, the power of your identity will loom large over you and prevent you from taking action. Harness the power of small, incremental change.

Have the courage to set the bar low enough and aim at targets that you can actually hit on a daily basis. Solidify this small habit into your life, and then do the same thing with another habit. And then another. And then another.

Justin is a young, ambitious self-improvement nut located in the Windy City of Chicago. His passion is to provide practical, action-based advice that people can use to facilitate change in their life. For further advice on building better habits, check out his website here or grab his FREE E-Book: 3 Steps to Creating Better Habits. This thirteen-page e-book will provide you with a step-by-step plan formula for building habits that stick.