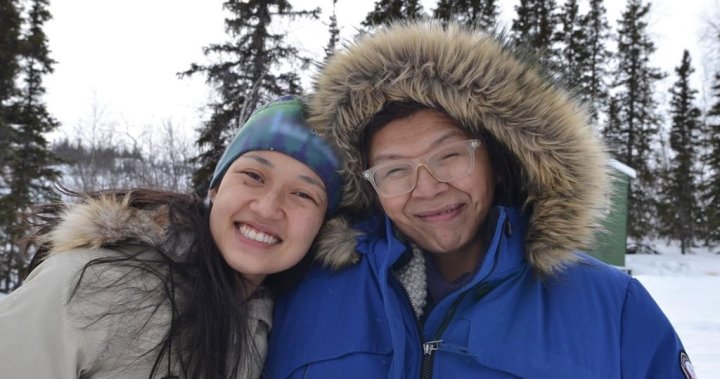 From legislative chambers to classrooms, and on the radio and TV, Indigenous languages are spoken and heard every day across the North thanks to dedicated elders, teachers, translators and broadcasters.

Jeela Palluq-Cloutier, who has long worked as an Inuktitut teacher and translator in Nunavut, said she learned the language from her unilingual parents while growing up in Igloolik.

“My dad’s passed now, but when I was translating I always had him at the back of my mind thinking: ‘He needs to be able to understand this,’” she said.

“Unilingual Inuit have a right to information and the information that’s being translated needs to be the best quality.”

Palluq-Cloutier took part in efforts to make Inuktitut and Inuinnaqtun available on Microsoft Translator and has translated more than 11,000 words into Inuktitut for Facebook.

While residential school and colonization robbed some Inuit of their languages, Palluq-Cloutier said those tongues are still thriving.

“We have upwards of 90 to 95 per cent speakers in some communities,” she said. “That’s something that I’m very proud of, that our language is still here, given the history where our government tried to erase it from us.”

More than 21,000 people speak Inuktitut, the 2021 census, indicates, and Inuktitut and Inuinnaqtun are official languages in Nunavut.

In the Northwest Territories, Tlicho is the most common Indigenous mother tongue with 1,700 speakers.

Georgina Frankie, who teaches Tlicho through College Nordique in Yellowknife, learned the language when she was young from her grandmother. Earlier this year, Frankie and language school co-ordinator Rosie Benning collaborated to publish a Tlicho workbook.

“All of the cultural teaching in the book is part of my grandmother’s teaching,” said Frankie, who lives in Behchoko, N.W.T.

“It means a lot for me because I have a granddaughter now and that means I have to leave something behind for her.”

Frankie continued to learn Tlicho during her decade living in Toronto and taught herself to read and write it by comparing English and Tlicho versions of the Bible.

Benning said Frankie is an inspiration because she was able to deepen her Tlicho while she was living far from home in Canada’s biggest city.

“She’s living proof that you can have a foot in both worlds and still succeed and thrive and you don’t have to deny your Indigenous roots to be successful in this world.”

5:00
University College of the North working to preserve culture, heritage, and language


Benning and Frankie said the language classes are an act of reconciliation as they allow people to reconnect with their culture and language.

“For a lot of people, it’s really healing,” Benning said.

Of the 11 official languages in the N.W.T., nine are Indigenous. Other work to support Indigenous languages across the territory include language circles and the mentor apprentice program, which partners learners with fluent speakers.

In Yukon, there are eight First Nations languages, although none are recognized as official languages there.

Paul Caesar-Jules learned Kaska from his grandmother and now teaches it. He said when he began working for the Liard First Nation’s language department, he digitized cassette tapes of elders speaking the language.

“The first time hearing a sad story, understanding what’s being said, I legit started crying just from this elder explaining it,” he said. “It was just really heartwarming and I felt really connected to the stories in our language and it’s just really, really beautiful.”

Poppe said she heard Kaska words growing up and became more passionate about the language in her teens after learning about Indigenous issues. Some of her family members were prevented from speaking their language at residential schools.

“It made me angry, it made me upset. So I wanted to sort of utilize that – turn that anger into passion and make it productive and try to do something for my community,” she said. “It’s nice being able to funnel that energy into something really, really important.”

Poppe said preserving language and passing it onto future generations helps connects people with their families and culture.

She said it has been especially meaningful seeing her mother reclaim her language.

“The way you talk about the world shapes the way you see the world,” she said. “We’ve lived here for a very long time and so we’ve gained quite a bit of knowledge about the land and just life around here.”

Ndilo, N.W.T., Yellowknives Dene First Nation Chief Fred Sangris said the funding is a step toward reconciliation and will allow his community to provide Wiiliideh language classes, camps and resources.

“We’re hanging onto our language at the very thread,” he said. “Without language, identity is lost. Without language, communication between the old and the younger community could not happen.”

This report by The Canadian Press was first published Dec. 29, 2022.

This story was produced with the financial assistance of the Meta and Canadian Press News Fellowship.

It Takes One Person To Make You Feel Like You Matter | Kyle Scheele Inspirational Speech | Goalcast
7 Ways Childhood Trauma Shows Up in Your Romantic Relationships
Uber Driver Donates a Kidney to His Passenger – Here’s Why He Insists It’s Not a Coincidence
This Is How You Become the Best Version of Yourself in One Step | James Lawrence | Goalcast
This Is What Self-Care Really Means, Because It’s Not All Salt Baths And Chocolate Cake