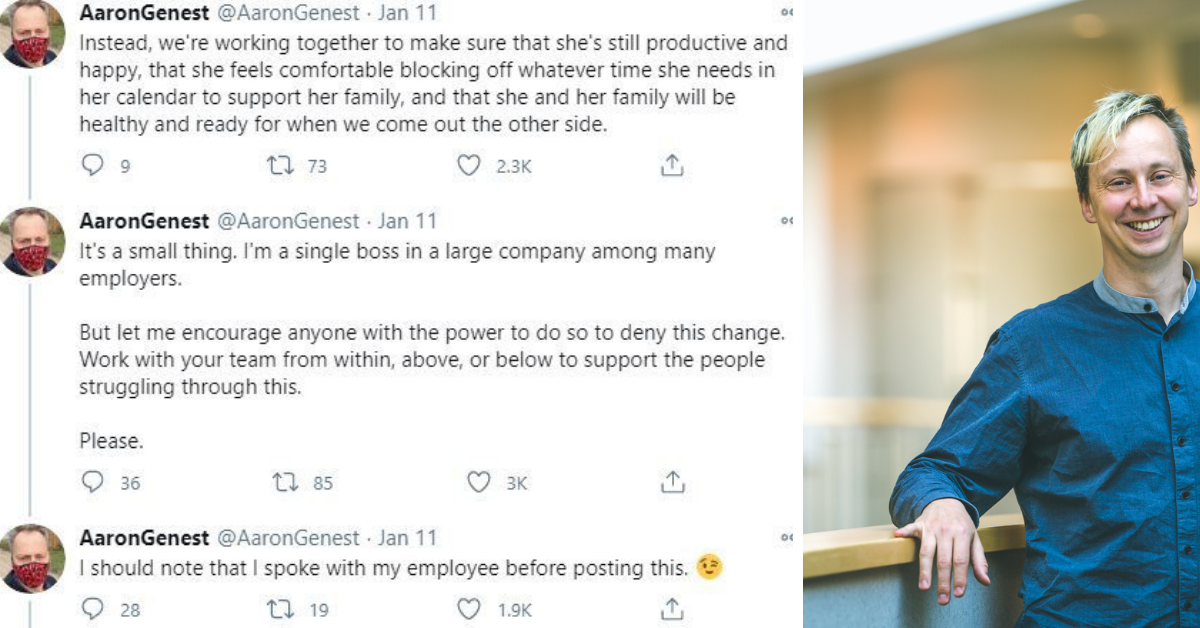 A Siemens software manager is being praised online for refusing to cut a female employee’s hours.

Instead of agreeing to cut her pay so she could help her kids with remote learning, her boss said she could work less for the same pay, sending a message to businesses everywhere about supporting women in the workforce.

The pandemic isn’t ‘the great equalizer’

The impact of the pandemic is not felt equally by men and women. Studies like this one show women are leaving the workforce at a substantially greater rate than men are because of their increased responsibilities taking care of children.

In this case, the woman asked her boss to cut her hours to 80% so she could spend more time helping her kids with remote learning while schools are shut. But her boss refused.

On Twitter, the boss explained why in a thread that has since gone viral.

Too much pressure on women

The boss, Aaron Genest, explains how companies still expect workers — especially women — to be just as productive as pre-COVID times with the added burdens the pandemic has brought on families. But “we shouldn’t,” he said.

Genest said his staff has been performing extremely well under the circumstances, even though they’re working fewer hours.

“I have a high-performing team who outperformed themselves again this year, outperforming almost every other team in my company in fact and winning awards for it,” he wrote.

So, how did they do it? “They did it by being a supportive group and working together,” he said.

Genest explains that his staff took time off to help with their families and their colleagues picked up the slack.

“When someone has to leave to pick up their kids, someone else covers. When a 2-year-old bounces into a business call, they smile and everyone understands. When a day is less productive because they can’t stand staring at the walls anymore, they get out so the next one is better.”

A message for bosses everywhere

So, he denied the woman’s request to cut her hours and her pay.

“No, you can’t sacrifice your career advancement because of a perceived lack of productivity. No, you don’t need to feel guilty about taking the time to make sure your kids are learning.”

Genest added that he wants this to inspire other companies to be more considerate of their employees during the pandemic.

“It’s a small thing. I’m a single boss in a large company among many employers. But let me encourage anyone with the power to do so to deny this change. Work with your team from within, above, or below to support the people struggling through this. Please.”

Genest finished the thread by saying Siemens in Saskatoon is hiring. However, before you jump at the opportunity to work with this considerate boss, keep in mind that today, the temperature in Saskatoon hit -39.2 Celsius (-38.56 Fahrenheit).

The pandemic is not business as usual

The pandemic has been so hard on all of us, the least we can do is be considerate. So if you’re a boss out there, give your employees a break — especially ones with kids at home.

And if you’re struggling, don’t be afraid to ask for help. We’re only going to get through this if we help each other.