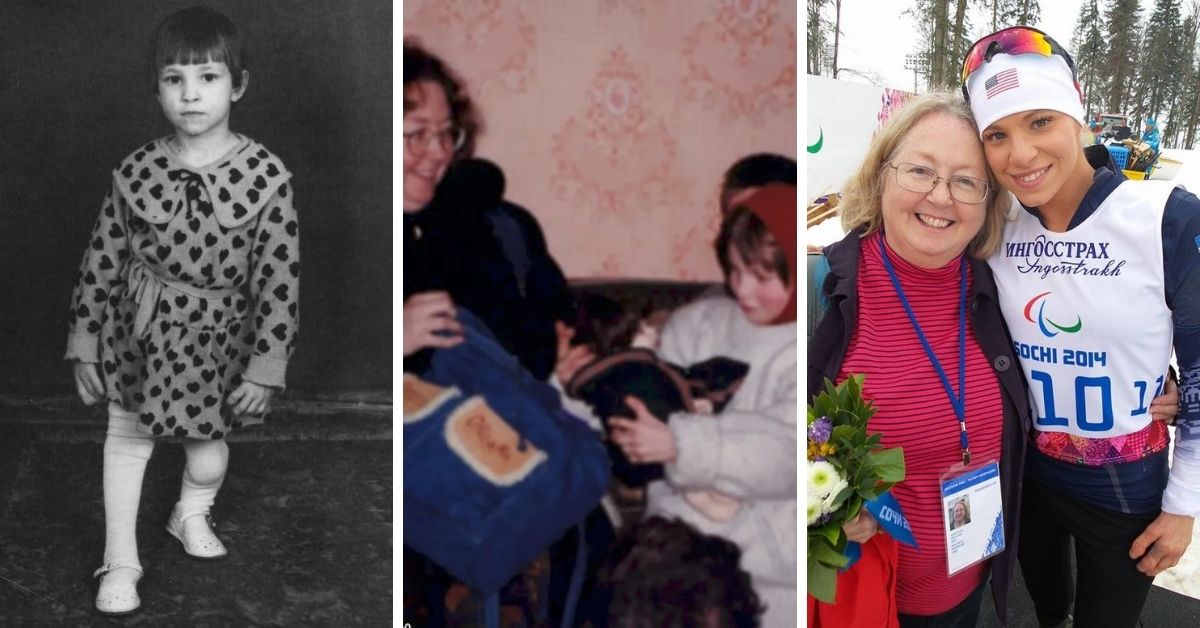 Oksana Masters has won eight Olympic medals , and also
won the “The Sportsperson of the Year with a Disability”
at The
Laureus World Sports Awards in Berlin, Germany.

It was there, in her acceptance speech, that she thanked her
biggest supporter.

“Mom, thank you for saving me, for giving me a second
opportunity at life,” she said turning towards her mother’s
seat, “and for opening the doors of sports and then waiting for
me until I was ready to walk through that door.”

The television camera then showed her mom, Gay Masters,  smiling up at her daughter but then
subtly shaking her head “no.”

“I didn’t save her,” Gay told The Courier Journal. “She would have saved herself, that kid is a survivor.”

In 1989, Oksana was born in Ukraine with severe physical defects, which is believed to be a result of radiation poisoning from the 1986 Chernobyl nuclear disaster.

Oksana was born with six toes on each foot and five webbed fingers on each hand and no thumbs. Her left leg was 6 inches shorter than her right and both were bones.

She was given up for adoption at birth and spent the first seven and a half years of her life in an orphanage.

That is, until Gay, a single woman who wanted to adopt a
baby, found her daughter.

“I had intended to adopt an infant because I know through my line of work how important the first year is for development,” said Gay.

But then I was given a black and white photograph of this little girl, there was a sparkle in her eyes and I knew, even though this child was not who I had set out to find, this was my daughter.

Her friends all advised against the adoption

Gay, who is a speech pathologist at the University of Louisville, says friends warned her not to adopt an older child, especially considering it was one with so many physical challenges.

But she did anyway.

“That really didn’t concern me, I worked with a lot of children who had cerebral palsy and couldn’t speak — but I always knew there was a person in there,” said Gay.

I was told Oksana would need to have both her legs amputated when she came to the United States, and I thought well that’s OK she can be in a wheelchair and still have a good quality of life.

But then, the adoption process ran into a roadblock.

“The adoption agency kept telling me it would be easier
to just go ahead and adopt a child from Russia, but I knew Oksana was meant to
be my daughter,” she said. “And I had also learned the orphanage
had given her my picture and told her I would come for
her.”

Knowing Oksana was waiting to be adopted, Gay could simply not abandon her.

For two years, she worked tirelessly to bring her daughter home

While Gay did everything in her power to bring her daughter in, Oksana waited.

“If I did something wrong, (the orphanage) would
tell me the American woman didn’t want a bad child and she wasn’t
coming,” remembers Oksana.

Two years later, Gay was in that orphanage dormitory to meet
her daughter.

“I know who you are; you are my mother,” Oksana said. She pulled out a photograph of Gay from her bedside table. She had kept it safe this whole time.

Language barriers were nothing to them

Finally, Gay took her daughter home. At first, they had some communication barriers: Oksana didn’t speak English yet, and Gay did not speak Ukrainian.

But after watching some American cartoons, she began to pick up more of the language.

Oksana and her mom were also pretty different from the start.

Oh yeah my mom and I were very different; she loves books and I loved to climb trees.

Oksana Masters in The Courier Journal

Oksana she was so active, too!

A surgery that would change Oksana’s life

Gay delayed the surgery that would see Oksana’s legs amputated, being considerate that a move to another country was already a considerable change.

“I realized I couldn’t bring her to a new home in a new country with a new language and immediately let the doctors remove her legs,” Gay said.

But eventually Oksana’s weakened legs couldn’t hold her weight anymore and they had to be amputated. She had one leg amputated at the age of 9, and the other one at 14.

The surgeries didn’t rob Oksana of her energy. She learned how to run on her prosthetics in no time!

“I had figured out by that point that sports were a kind of therapy for her and I signed her up for horseback riding lesson,” Gay said. “I told her it was a state law in Kentucky that everyone learned how to ride a horse.”

Oksana wasn’t into the idea of riding, or joining theLouisville Adaptive Rowing program on the Ohio River, which one of her teachers suggested.

I didn’t like the idea of a sport that was geared towards people with disabilities. I wanted to feel like everyone else.

But Gay persisted: “I told her it was just one Saturday, and if she didn’t like it, she wouldn’t have to go back.” She told her daughter to “suck it up.”

And it paid off. Oksana ended up loving rowing! “She was pretty quickly the best rower that they had,” Gay said. “I think that’s because she’s determined, stubborn, competitive and motivated.”

Her newfound passion took her all the way to the Paralympics

Oksana kept with rowing and took it all the way to the Paralympics in London in 2012. By the 2014 Olympics, she had a bunch of silver and bronze medals to her name!

“Sports helped me to learn to appreciate my body more
for what it was able to do, not on what it was missing,” she
said.

She then took up hand cycling, and competed in the 2016 Rio
Olympics, too.

“It is exciting to watch her compete and it does make
me nervous for her,” Gay said. “But you know I am really there
just to support her — not so much because I care about the
outcome — what’s most important is that she is proud of
what she did, whether that’s win or lose.”

One thing is sure, she will never forget the girl she had been, and how everything changed. And she has one powerful message to the world:

“To any girl or boy, if you guys look different or you think you look different, never let society determine what you see when you look in the mirror,” Oksana told the crowd. “Never let them (society) determine the preconceived notion of what is possible. Go for it.”

Uber Driver Donates a Kidney to His Passenger – Here’s Why He Insists It’s Not a Coincidence
Year of the Rabbit: Canada’s animal shelters urge not to adopt bunnies on a whim
This Is How You Become the Best Version of Yourself in One Step | James Lawrence | Goalcast
7 Ways Childhood Trauma Shows Up in Your Romantic Relationships
How to Make Things Better When It Seems Like Everything Is Going Wrong