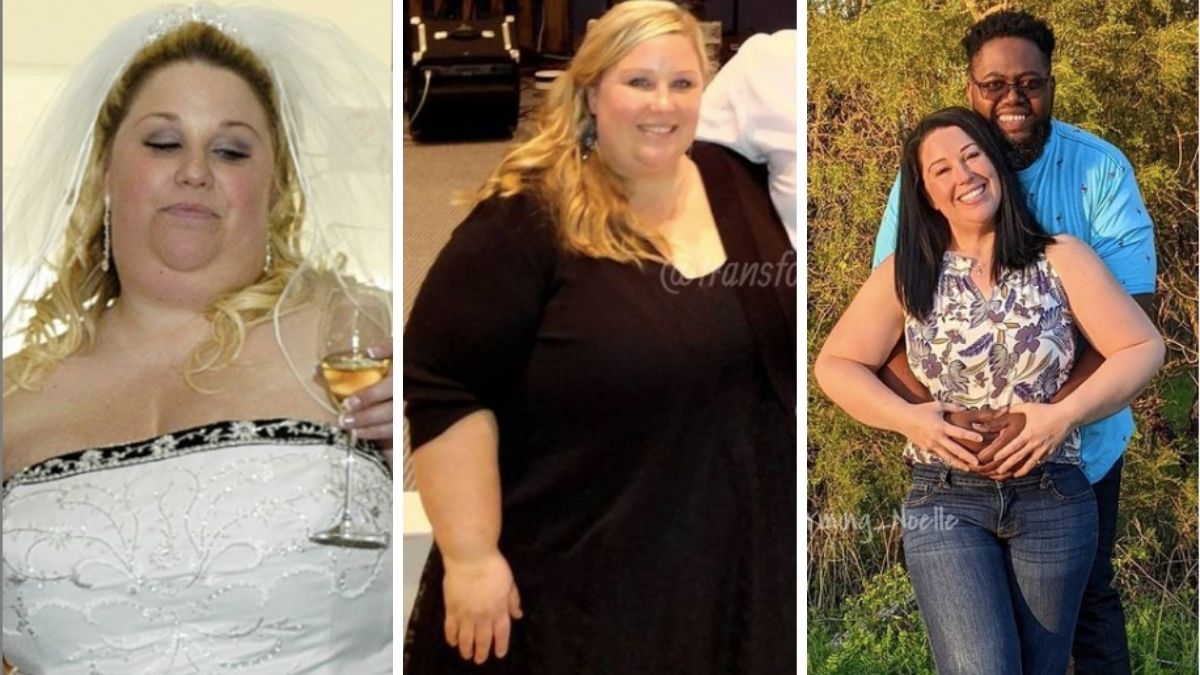 In life we often wait for signs. Signs act as indicators as to whether or not we should continue on in the same direction or make a hard turn at the wheel.

For one woman, her sign would show up in the absolute absence of a sign. This prompted her onto a trajectory that would change her life forever.

Noelle Dawson thought that her scale was broken when it wouldn’t read her weight. Many of us have had that moment when we question if the scale is working or not because we simply do not want to believe what we see. We often laugh off the arrival of extra pounds by calling the scale a liar, except when Noelle stepped on the scale, there were no more deceptions. She discovered that the scale in fact was not broken, but it simply was not equipped to read her body weight.

The scale had a weight limit of 408 lbs, and Noelle exceeded that weight at 414 lbs.

That was the moment that Noelle took control.

She had years of habits to unlearn

Growing up, Noelle competed as a gymnast which contributed to an unhealthy relationship to binge eating. Noelle Dawson lost 234 lbs in one year’s time. Dawson dropped the pounds by using the keto diet and hitting the gym. Then, after the weight loss, Noelle underwent surgery for the excess skin.

During Noelle’s gymnast days she would binge eat, and then would often have a poor performance the next day. This would lead her coaches to “punish” her which started a toxic cycle of overindulgence. Once Noelle stopped being physically active, her relationship with food went from bad to worse.

Dawson met her husband Chris at the age of 25-years-old when she was 325 lbs. She wanted to start a family, but there were complications along the way.

“I knew I wanted to become a mother. We struggled quite a bit, we tried for years and still could not become pregnant,” Noelle reveals. It didn’t help her situation.

That caused my weight to spiral even more. It just piled on. We had two failed adoptions and I hit almost 400 lbs at that point.

But then, things took a serious turn

At that point, Noelle decided to step on the scale, but the scale read back “Error.”

Thinking it was the scale that was erroneous, Dawson changed the batteries and stepped on the scale again. When it still would not read her weight, Noelle realized that the scale had a limit of 408 lbs.

After purchasing a new scale with a higher weight limit, Noelle felt heartbroken by what she saw.

I weighed in at 414 lbs. I was devastated, my heart sank. I knew if I didn’t make a change in that moment, there would be no Noelle.

Noelle reveals that she also truly feared for her health to the extent where she felt it could threaten her life. She says, “Before I started my journey, I remember waking up every morning thinking when’s that day I’m not going to wake up due to how heavy I was.”

From dieting to working out

Noelle revaluated her nutrition and made the switch to a ketogenic diet and dining at home. After losing 200 lbs, she decided to return to working out and was amazed and how it felt.

Dawon says of resuming an active lifestyle, “I had all of this energy. Becoming that active after years of sitting on the couch was… oh my gosh! The high that I got from being at the gym was incredible. I went from being immobile to very mobile.”

While Noelle considers herself “body confident,” she also has her insecurities. She explains, “I am very proud of myself. I’m very body positive but of course I have insecurities with the skin. I just want to not have to tuck it in. When I’m working out, the skin slides right out.”

Noelle underwent a tummy tuck and an arm lift to address the excess skin and a breast reduction as well.

Noelle says of life post-surgery, “I’m able to see the true results now the skin has been removed.”

Betting on yourself is always worth it

The mother of 5 reveals, “Being able to do all the things I couldn’t is an indescribable feeling. I’m able to live my life with my children and watch them grow up while being in on the action, that’s the best part of the journey.”

Noelle adds, “It continues to inspire me and motivate me to stay on the right track. I’ve learned so much about myself, my relationship with food; that I am worthy and I am enough. It feels so good to feel free from these chains that held me back from being happy.”

Noelle’s supportive husband Chris says of her journey, “My wife’s transformation, her outward appearance is amazing, you can see the results she’s worked for.”

Chris continues saying, “The biggest thing for me is her mental transformation, it’s like a new light has been turned on it’s even brighter and she shines.”

Noelle’s smile is shining brighter than it used to and those around her can feel her light. In reclaiming her physical health and putting herself first, Noelle improved her overall energy. She can feel it, and according to her husband, her family can as well. Signs in life can point you in the wrong or right direction. Noelle saw the word “Error” and identified what needed to be done right then and there.

Never be afraid to take action when you can read the signs clearly. They are there for you to make sense of your environment and to guide you on this journey we call the human experience. Sometimes in life we feel as though we do not know what to do, but when clarity is upon us and the path becomes known, it is best to act with your best interests at heart.

Read the signs so you can walk the course.