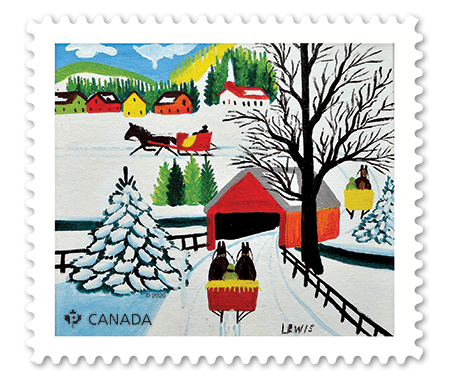 The agency announced the choice of the works by the late artist today in a news release.

The paintings used for the new stamps are from seasonal works held in the collection of the Art Gallery of Nova Scotia.

They are “Winter Sleigh Ride,” “Team of Oxen in Winter,” and “Family and Sled.”

This year’s Christmas stamps feature artwork by one of Canada’s most beloved folk artists, Maud Lewis.

Lewis’s lively depictions of rural life gained her national and international recognition towards the end of her life and in the decades after her death in 1970.

Her works largely feature sights she would have seen around her tiny home in Marshalltown, near Digby, N.S.

Her paintings, which once sold for as little as two dollars, have become prized in recent years, in part as a result of the 2016 biopic “Maudie,” which rekindled interest in her story.

Though the works are joyful, Lewis’s life was marked by poverty, health issues and poor treatment from her loved ones.

Born in 1903, she lived most of her life in pain from rheumatoid arthritis, which left her hands gnarled and limited her ability to paint.

This report by The Canadian Press was first published Nov. 2, 2020.

8-Year-Old Boy’s Family Is Down to Their Last $12 Living in a Shed – Until His Own Business Saves Them All
He Was Fatally Beaten by Memphis Police — Now People Around the World Are Sharing #SunsetsForTyre in His Honor
The two kinds of productivity advice
Podcast: What to know about “novelty hunting.”
How to Show Up When Nothing About Your Life Is Perfect