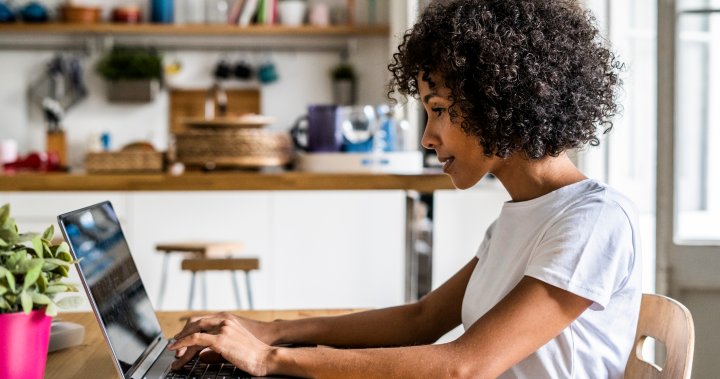 The thought of going back to work in an office terrifies Kiran Jaswal. As one of the few women of colour at a large Calgary-based non-profit, returning to the office means returning to daily microaggressions and dismissals from her coworkers.

(Global News is using a pseudonym to protect her privacy.)

“Being at home has been very good for my well-being because I can turn off the computer and be away and safe from that toxicity,” she says. “The office … didn’t provide that escape.”

Over the past year, many Canadians have been working from home due to the COVID-19 pandemic. This includes some racialized people who have found that distancing themselves from office culture has actually helped their mental health.

A 2019 Race Relations in Canada study, conducted by Environics Institute For Survey Research, found the workplace was one of the most common places to face discrimination. About 40 per cent of those who experienced racism told surveyors that it happened at work.

2:45
Back to the office? Employment experts predict a post-pandemic ‘resignation boom’

Back to the office? Employment experts predict a post-pandemic ‘resignation boom’ – May 17, 2021

And though further research has found that the majority of Canadians — not just racialized workers — don’t want to return to work in the office post-pandemic, experts say many racialized workers can relate to Jaswal’s reasons for not wanting to do so, and their daily office work life is the source of much personal discomfort.

“I’m dreading going back to the office. And it’s almost entirely due to not wanting to deal with the constant ignorance of my coworkers,” she says.

Psychotherapist and social worker Celine Williams-Tracey says many visible minorities in professional settings often have to “code-switch” when they are at work.

The term, coined in the 1950s, was first attributed to bilingual individuals who switched between languages.

Now, it commonly refers to behavioural shifts in appearance, accents and mannerisms (often for racialized individuals) in order to conform to work settings — which can be predominantly white, Williams-Tracey says. This personal alteration to “fit in” also happens in some social settings.

“Code-switching is a form of survival,” she says.

Unfortunately, code-switching comes at a cost: it can cause greater anxiety, depression and burnout, she adds.

For Jaswal, code-switching was something she did every day at work unconsciously, like using a different voice to answer a work call or biting her tongue when a colleague would make an insensitive comment about a client that might also have applied to her and her family.

“The last thing you want to do is tell these people, ‘Oh, yeah, that’s also an issue I deal with,” she says, adding that code-switching was a form of self-preservation for her.

Read more:
A workplace resignation boom may be looming. Here’s why

She would rely on her long commute home to unpack her emotional exhaustion, assuming that it was “a response to the nature of (her) job.”

But working away from her colleagues over the past year, she says she hasn’t been feeling the same amount of burnout, even though she’s doing the same work as before.

“I don’t work in an overtly racist … (or) homophobic workplace. I think when people hear these things, they assume that this must be the worst place to work ever,” Jaswal says. “And we don’t realize that this is probably just the average workplace.”

3:46
Health impacts of working from home in the era of COVID-19

Williams-Tracey says that code-switching is still something people experience working from home.

She gives the example of adjusting your Zoom background: taking down Afro-centric art, masks or bongos, and opting for a plain wall instead.

“Your home should be your refuge … but having to even compromise your decor or the presentation of your home for your other colleagues — that itself can relate to burnout,” she says.

Carl James, a professor at York University who studies community, diaspora and equity in education and employment, says when we’re discussing the systemic racism which exists in our workplaces, “racism is not lessened, it’s going to take a different form.”

He adds that some racialized people have talked about management being suspicious about them working diligently from home.

For Emily Bousan, a journalist based in Montreal, working from home was something she was accustomed to even prior to the COVID-19 pandemic. (Global News is using a pseudonym for privacy reasons.)

Still, she finds herself exhausted from code-switching, having to speak in a different way than she would with her friends and family.

“I often feel like I’m saying the wrong thing,” Bousan says. “It pains me that I’ve had to pretend to speak a certain way for fear of coming off as uneducated or ‘ghetto.’”

As the only racialized journalist on her team, she’s been putting in extra time to champion better representation in the workplace — and in the stories her publication covers.

“I wanted to quit because it’s not my job to educate people who are ignorant,” she says. “But I feel a responsibility to change things … not just for me but for people who get hired after me.”

She adds that it’s easier for her to speak her mind because of the virtual environment she works in and an office would hamper her ability to be as open on diversity issues due to her fear of “physically standing out.”

Since the death of George Floyd and the Black Lives Matter protests last year, many businesses have been forced to reconcile with their own missteps and lack of diversity in the workplace.

But when Bousan joined a diversity, equity and inclusion committee at her work, she noticed the problematic way her coworkers addressed the topic.

“They were saying ‘We need more skin colour diversity’ or ‘We need homosexual diversity,’” she says. “It was inappropriate and they were very tokenizing.”

Though some companies have made an effort to hire more people from different cultural backgrounds, James says it’s important not to confuse representation for inclusion.

“You have to change the structure in order to be accommodative … of all the people that come into it,” he says.

This means more than just a one-off diversity and inclusion training session, he adds.

“COVID-19 has given us an opportunity to rethink, ‘What does ‘normal’ mean? And what would it mean to establish a normative kind of environment for the diversity of people we have working for us?’” he says. “Diversity provides a richness to the work.”

2:42
Optimism and skepticism about progress on racial justice one year after George Floyd’s murder

Optimism and skepticism about progress on racial justice one year after George Floyd’s murder – May 25, 2021

For racialized workers who have to return to an office and are feeling anxious, Williams-Tracey recommends finding a mentor who can help you navigate the space.

“We don’t learn about the political climate of a workspace in school. … Finding someone that can relate can make a huge difference,” she says.

Additionally, she recommends coming up with an action plan.

“Ask yourself if your workplace is a safe place for you. What is your alternative? Where will you thrive the most?” she says. “If it’s financially feasible, you might have to find a different job.”

Seeking an employment specialist to help you rework your resume might be helpful for you to land a position in a better environment, she adds.

Also, using meditative apps or having a physical safe space in the office where you can separate yourself from your coworkers can help alleviate stress, Williams-Tracey says.

“It’s important to remember what sort of things make you feel happy, (like) having alone time and spending time with friends and family,” she adds.

‘It was my heart’: Women with heart disease face barriers to care in Canada, report says
Tough Times Don’t Last (Official Music Video) Fearless Motivation
Deaf Domino’s Employee Delivers Pizzas on Foot After His Car Breaks Down – In Return, He Gets a “Tip” of $12,000
MASTER SELF MOTIVATION – Les Brown Motivational Speech
Kentucky Woman Gets Unbelievably Lucky at Her Office’s Christmas Gift Exchange — Now She Can Afford to Send Her Kids to College