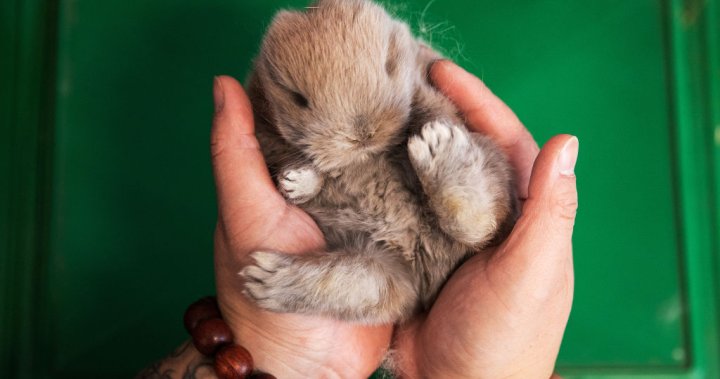 This Lunar New Year, rabbit rescue groups in Canada are hoping that the Year of the Rabbit would turn out to be more about awareness — a year that not only educates people to carefully consider before adopting bunnies, but also draws focus on the rampant abandonment of these furry animals.

Sometimes people “get caught up in the excitement of a holiday or a larger festival” and don’t really put much thought before getting an animal, says Haviva Porter, the executive director of Ontario-based charity Rabbit Rescue Inc.

“We see it all the time with not just rabbits,” Porter told Global News on Saturday. “When the movie 101 Dalmatians came out, everyone wanted a Dalmatian, and people wanted owls during the Harry Potter craze.”

1:24
Here’s how you can help rabbits in need

Porter says although it’s hard to know exactly what goes through peoples’ minds when they are adopting pets, having more accurate information available for the public could help them make more informed choices.

One of the big misconceptions is that rabbits are small pets that can be just kept in a cage and not given much attention, says Porter.

“That couldn’t be further from the truth,” said Porter. “They are much more work I find than cats and dogs. They don’t belong in a small cage. They like a larger pen.”

Another thing people are often unprepared for is the medical costs of rabbits, she says.

Porter says people should always spay and neuter their rabbits to prevent them from breeding, especially since each litter can have anywhere between one to 12 babies.


Sorelle Saidman, the founder of B.C.-based rabbit rescue organization Rabbitats, says many shelters in the country are already reaching their limit because people are giving up their pets as they return to work or can no longer afford a pet due to rising costs of living.

Moreover, Saidman expects 2023 to be “a very intense year” for animal rescue groups because of the heightened interest in the Year of the Rabbit and the upcoming Easter holiday.

“We’re really hoping to use (this year) to highlight the problem with having unsterilized rabbits out in the environment and being sold to people by breeders and by pet stores,” said Saidman.

Saidman says there are close to 2,000 abandoned pet bunnies and their feral offspring in Richmond, B.C., alone. Rabbit colonies are also popping up in Alberta, Ontario and the East Coast with more and more people abandoning unneutered rabbits in parks, she adds.

“It’s a matter of time before it’s going to be uncontrollable,” said Saidman.

Meanwhile, Lyla Frick, the founder of Pumpkin’s Acres Rabbit Rescue, is drawing attention to the practice of fostering before adoption.

Frick says if people are not in a position to adopt, they can sign up to be foster homes for rabbits.

“For people who aren’t necessarily sure if adopting is right for them, fostering is a good option because then they can get to know what it’s like taking care of a rabbit and then see if it’s something that they actually want to commit to,” she said.