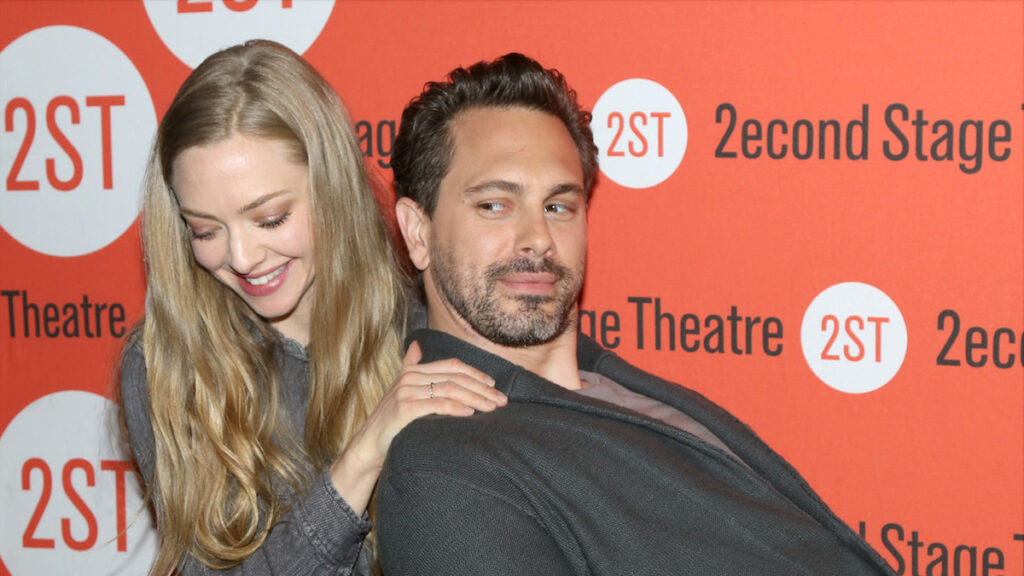 Their love story was guided by fate!

Amanda Seyfried and Thomas Sadoski are pros when it comes to keeping their personal life private. They’ve repeatedly taken fans by surprise by reaching major relationship milestones in total secret, whether it be getting married or having a baby (twice!). These two actors see their union as something truly personal and they’ve always done things their way. From the outset, they’ve trusted the power of their connection and, as Sadoski told James Corden, their decision to elope after just a few months of dating wasn’t all that crazy when you consider the fact that Seyfried is “the person I love, admire, and respect most in the world.” But while they’ve done an impressive job of keeping their romance under wraps, they have given us some glimpses into their home life over the years.

Here’s everything we can learn from Amanda Seyfried and Thomas Sadoski’s top-secret relationship:

Amanda Seyfried and Thomas Sadoski (who’s best known for his roles in The Newsroom and Life in Pieces) first met in 2015 when they were cast opposite each other in a two-person play called The Way We Get By. The off-Broadway production saw them playing a couple struggling to figure out if they had a future together. The script featured plenty of intimate moments between the two and, although the play received less-than-stellar reviews (Vulture dubbed it a “disappointing mousetrap”), it was life-changing for them both.

A real friendship soon formed with Sadoski calling the Mamma Mia! alum “a perfect scene partner,” but they kept things platonic as they were both in relationships at the time. Seyfried was dating Justin Long and Sadoski was married to Kimberly Hope, but by the time they met again on the 2016 set of The Last Word, everything had changed. Seyfried and Long had broken up in September 2015 after two years of dating while Sadoski and Hope decided to split up in October 2015 after eight years of marriage. Filming of The Last Word began around February 2016 and by March 2016, People confirmed that Seyfried and Sadoski were dating, reporting that “things began to heat up when they were recently reunited on set.”

Amanda Seyfried and Thomas Sadoski were respectful of timing

Given how quickly the couple’s relationship evolved, there were some who assumed that their romance actually began to bloom back on The Way We Get By stage. But Amanda Seyfried was quick to shut down such speculation, telling Net-A-Porter that although they met when “we were both in bad relationships,” they were respectful of timing. The actress was adamant that Sadoski “never flirted, never disrespected his wife” while they were performing in New York and underscored the fact that “that was another reason why I thought, later on, that I could marry him.”
But as it turns out, she did take an active role in making the connection happen. The Mean Girls star told the mag that she actually suggested Sadoski should play her love interest in The Last Word after learning he was single. Once they were reunited, she let their natural, effortless connection do the work. “It was amazing,” she gushed. “It felt healthy and freeing and clean. We can tell the story without any guilt.

Always do what feels right for your relationship

From early on, it was clear that Amanda Seyfried and Thomas Sadoski were not interested in following any set relationship rules. It was September 2016 when Us Weekly confirmed the pair were engaged after less than a year of dating. Jump to November 2016 and the actress took everyone by surprise when she revealed a baby bump at the launch of Givenchy’s Live Irrésistible perfume. Then, staying true to their penchant for secrecy, the couple tied the knot without telling anyone.

Sitting down on the The Late Late Show With James Corden on March 16, 2017, Sadoski revealed that he and his fiancé had actually said “I do” the previous Sunday. “We eloped,” the actor began, sharing, “We just took off into the country with an officiant and just the two of us, and we did our thing.” They wrote their own vows and “it was beautiful. It was everything that it should be. It was just the two of us talking to each other,” he gushed.

[our connection] was amazing. It felt healthy and freeing and clean. We can tell the story without any guilt.

When Corden asked what happened after the ceremony, he laughed that it was “sort of perfect” because once the officiant finished, “you take the dog and you walk through the country and go home. And you, like, have your life. We went out to dinner, we did great, it was awesome,” he continued. “We had a great day. It was perfect.”

Speaking with Net-A-Porter in 2018, Seyfried also opened up about their wedding day, revealing just how intimate it was, and how true to their wishes. Noting that there was no wedding reception, the actress shared that they went for brunch at one of her favorite L.A. restaurants, Cheebo, following the nuptials. “We got married in Topanga, March last year. Just the two of us. And afterwards, I was like, ‘Can we just go to Cheebo?’ It was awesome,” she told the mag.

She was nine months pregnant at the time and picked out a dress at Free People, “but I never picked any f****** flowers!” she laughed. Asked why it was so important to tie the knot before the baby arrived, she explained, “I really wanted to have rings on in the hospital, you know? And what if something goes wrong, and he’s not legally my husband?”

Even the best relationship has its challenges

Despite having a seemingly perfect relationship, Amanda Seyfried and Thomas Sadoski’s romance is as real as it gets. Over the years, they’ve spoken openly about some of the challenges they’ve faced, including Seyfried’s worries that things were going too well. Speaking with The Sunday Times, the Mank actress admitted, “I remember thinking, this might be the first time that we never say goodbye. And I was scared because all my relationships had lasted two years, and I didn’t want this to end,” she said, adding, “To me, the sexiest thing about him was the fact that I could rely on him. He was a really good man. Reliability — hard to find.”

To me, the sexiest thing about him was the fact that I could rely on him. He was a really good man. Reliability — hard to find

Amanda Seyfried about her husband

They faced another potential bump when Seyfried was cast in Mamma Mia! Here We Go Again opposite her ex, Dominic Cooper. As she told The Mirror, Sadoski had some reservations about the reunion and she totally understood. “I think he has the same kind of issues that I would have if we were hanging out with his ex-girlfriend from long ago,” she said, explaining, “I think it’s always like, ‘I’m so in love with this person, so that person must be so in love with her too.’”

“I assume everyone’s in love with Tommy because I’m in love with him,” she continued, noting, “I’d guess he assumed Dominic is in love with me the way he’s in love with me. And it’s just not the case. It’s sweet. I’d rather he be jealous than completely fine with it. He’s been great,” she conceded. “He’s very supportive and he loves this movie, and [he and Dominic] got along absolutely fine when we were shooting.”

Amanda Seyfried and Thomas Sadoski are all about family

In addition to acting, Amanda Seyfried and Thomas Sadoski have a shared love of family and giving back. After welcoming daughter Nina in March 2017, they had son Thomas in September 2020 (a secret they kept until after his birth) and, as they shared via the INARA charity’s Instagram page (they’re both board members), their growing family has inspired them to help children in need. “Since the birth of our daughter 3 years ago our commitment to the innocent children that are so brutally affected by conflict and war has been a driving force in our lives,” they wrote alongside the debut image of little Thomas. “With the birth of our son, the work of INARA and War Child has become our North Star.”

Showcasing just how important family is to them, Sadoski told James Corden that he was more excited about becoming a dad “than I’ve ever been about anything in my life.” Meanwhile, quality time with her family is the thing Seyfried has cherished the most during quarantine. As she told Molner’s Table in August 2020, a typical day has plenty of family time. “These days, it’s been me waking up and going downstairs and drinking coffee and hanging out with my daughter and then Tommy feeding [the animals],” she shared. “And you know what? Our family’s still together,” she laughed. “I definitely think my marriage is even stronger.”

From the very beginning, Amanda Seyfried and Thomas Sadoski have played by their own rules, always doing what felt right to them. Rather than trying to follow tradition or please anyone else, they stayed true to themselves (both as individuals and as a couple) and it’s this honest approach to love that’s been their key to true happiness.

Service Dog Stays at Hospital With His Owner 24/7 — While Nobody Else Was Allowed to Stay
8-Year-Old Boy’s Family Is Down to Their Last $12 Living in a Shed – Until His Own Business Saves Them All
‘It was my heart’: Women with heart disease face barriers to care in Canada, report says
New Barbie Doll Honours First Black Aviator — Inspires Youth to Take to the Skies (PHOTOS)
He Was Fatally Beaten by Memphis Police — Now People Around the World Are Sharing #SunsetsForTyre in His Honor