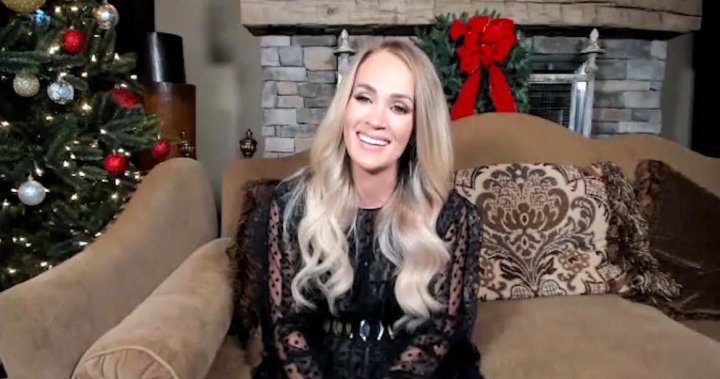 Carrie Underwood has a special gift for everyone this holiday season.

The country music superstar dropped her first-ever Christmas album My Gift in October, and now has her very own HBO Max special to accompany the project. (The special can be watched on Crave in Canada.)

My Gift: A Christmas Special from Carrie Underwood sees the seven-time Grammy winner performing original and beloved classics off the 11-track project, including her duet with John Legend on his new ballad Hallelujah.

“He did such a great job,” gushes the mother of two. “He sang from his heart, and I think that’s the coolest thing. He doesn’t really know my job, he doesn’t know that there’s lots of people out there that listen or come to the shows. I mean, he’s seen me in concert but I don’t think it quite registers.

“He loves singing, so I feel like you can really hear that in the song.”

On whether Underwood thinks Isaiah will follow in her footsteps, she says, “He loves music, he has a lyrical mind, like he remembers lyrics really well and he’s always making up his own songs. We’ll see where that takes him in life.”

Like many celebrities, Underwood wants a healthy balance between keeping her children private and sharing memorable moments with them on television and social media, which she admits is a constant conversation with her husband Mike Fisher on “what’s worth it” and what isn’t.

“I don’t want to plaster my children all over everything I do ’cause they’re gonna live their own lives and they’re gonna have their own things,” she explains. “I would never want anything I do or post or whatever to come back to haunt them or embarrass them when they’re older.”

At the same time, Underwood admits: “There’s certain things it’s like, ‘Ughh, I need them to be part of that.’”

(At this time, HBO Max is not available in Canada. You can watch the My Gift special on Crave.)