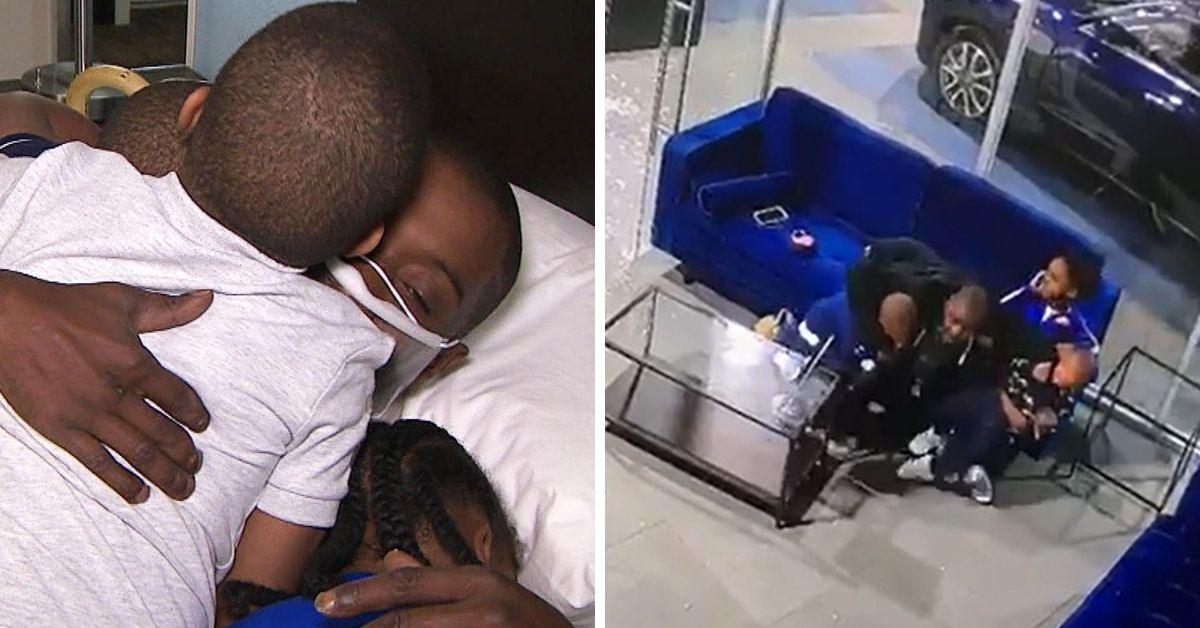 They say no good deed goes unpunished and for one New York
City dad – that proved true. After shielding his three kids from gunfire and
saving their lives – he ended up losing not one, but two jobs as a result!

Anthony Jefferson lost his two jobs following the gunfire at a Bronx car dealership. It was a case of being at the wrong place, at the wrong time as neither he, nor his children, were the targets of that brutal shooting.

His instincts kicked in

Anthony told WNBC-TV that he had gone to the dealership in hopes of finding a car for his wife’s birthday.

“I was trying to surprise my wife for her birthday,” he said.

He was sitting on the couch at the dealership, when three unnamed suspects opened fire outside the building.That’s when the dad acted with instinct and threw his children to the floor so he could shield them from the bullets that were coming through the window.

As a result, Jefferson was hit three times: once in his right thigh and twice in his foot. He told NBC that when he heard the shots, only one thing was on his mind: “Get my kids and get low, to safety.”

While Anthony survived his injuries, he was yet to receive another blow. He lost both of his jobs — one as a head painter and one as a construction worker — after his injuries left him unable to walk.

Serena Wingate, a family friend, set up a GoFundMe page to assist Jefferson and his family during their time of crisis.

Wingate
wrote, “On 9/21/20 at approx 7:20 PM, [Jefferson] was inside of 4077
Boston Rd in the Bronx with his three kids shopping for a vehicle to surprise
his wife as her birthday gift, when 3 suspects fired multiple shots at a male
who then returned fire, striking Anthony Jefferson 3 times, twice in his boot
and once in his thigh as he was attempting to shield his 3 kids from the
gunfire.”

“As he shielded his kids, the 3
suspect’s [sic] continued to shoot,” Wingate continued. “Due to his
injury, Anthony lost his job and has to have surgery to remove the bullet. This
Go Fund me is to help this heroic dad with his medical bills and his kids with
therapy. They are beyond traumatized.”

Jefferson said his children are still suffering. “They’re traumatized,” he said. “My 2-year-old gets up in the middle of the night screaming. It’s heartbreaking.”

When they heard his story, strangers answered the call

However, Serena’s initiative to help the Jeffersons was not in vain. After many read of his heroic sacrifice, they pulled together to help him in his time of need.

“I truly want to thank everyone for their well wishes and get well soon and praise for my family. I appreciate that from the bottom of my heart,” Jefferson told NBC New York.

Anthony put his life on the line for his two children, losing his jobs as a result. However, his heroic actions have touched the heart of many, who have decided to come to his rescue. Great deeds never go unrewarded.

All the Things I Didn’t Tell the Men I Dated Because I Was Afraid
Podcast: What to know about “novelty hunting.”
The Most Heartfelt Speech About Being Your Best | Gian Paul Gonzalez | Goalcast
These Letters from a Single Mother Will Make You Believe in Love Again | Philicia Baugh | Goalcast
‘It was my heart’: Women with heart disease face barriers to care in Canada, report says