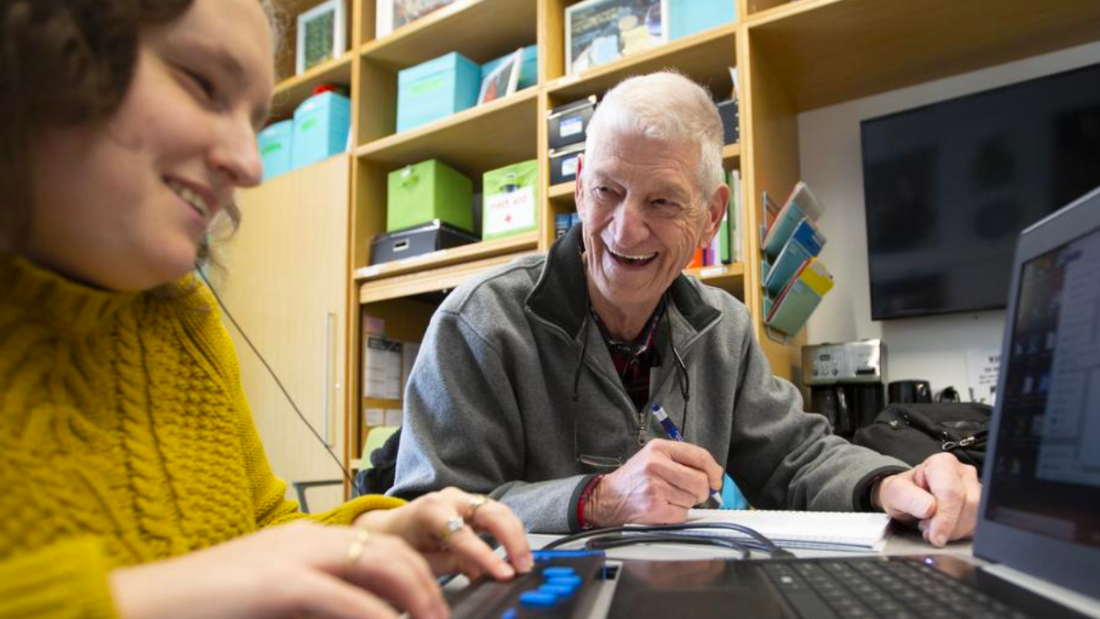 It was 2015 when Ron Robert received the diagnosis; he was in the early stage of Alzheimer’s disease. He was 77 years old.

While the news wasn’t a complete surprise — he had two siblings that had passed away with the disease — it was still devastating. Immediately losing his driver’s license didn’t help. He spiralled into depression.

However, he didn’t stay down for long. With grit and determination, he clawed his way out of the darkness and decided this wasn’t going to be where his story ended.

Rather, it was going to be the start of a new beginning.

Ron Robert’s Message is One of Hope

“A diagnosis doesn’t mean you have to stop living your life.” Robert wrote in an essay published on the Alzheimer Society of Canada’s website. “After I was diagnosed with Alzheimer’s, I decided I had two choices: I could give in and do nothing, or I could fight back.”

He chose to fight back.

“I certainly didn’t want to sit on my butt and let my brain turn to mush,” he said.

After enjoying a long career as a political broadcast journalist and later as a special assistant to former prime minister Pierre Trudeau, there was still one thing on his bucket list: he wanted to get a university degree.

RELATED: Serena Williams’ Husband Alexis Ohanian Is Proof of Why You Should Never Settle for Less in Love

Robert enrolled in classes as a political science student at Wilfrid Laurier University in Waterloo in 2017.

He spent the next four years going to school three days a week. He took 35 courses on history, political science and cross disciplinary studies, first at Wilfrid Laurier and later at King’s University College in London, Ont.

Throughout his schooling, Robert struggled with his short-term memory loss (although his long-term memory actually improved). He credits his professors for adapting to his needs and recording the lectures so he could listen to them multiple times.

Here’s What He Wants People with Alzheimer’s to Know

He went from a D in his first exam to an A in his final exam in Political Science. He completed homework and penned papers, took quizzes and wrote final exams. His hard work paid off. He graduated with a three-year bachelor of arts in cross disciplinary studies in October.

“It’s such a wonderful feeling,” Robert said. “It gives a lot of people hope that they can live they can still live a good life with Alzheimer’s. There will come a time when I won’t be able to, and I fully expect that. But in the meantime, I’m living a full life.”

Alzheimer’s disease affects nearly 50 million people worldwide. 1 in 10 Americans over the age of 65 has Alzheimer’s. And yet, there is a significant lack of resources available. Robert hopes to change that. He’s now one of the faces of the Alzheimer Society London and Middlesex. He is speaking with doctors and medical students, explaining how important offering support and information in the midst of a diagnosis is. And he hopes that his journey can inspire others.

Robert also doesn’t plan on stopping his post-secondary education any time soon. Next up on his bucket list? He plans to begin studies for a Master’s degree. He hopes to research ways of living better with Alzheimer’s disease, with his own experience as a model for others.

7 Ways Childhood Trauma Shows Up in Your Romantic Relationships
How to be the Smartest in the Room | Ibram Kendi | Goalcast
Haute couture goes ‘surreal’ and upside-down at Paris fashion show
Louisiana Woman Gives Free Wigs to Children Suffering Hair Loss — Their Reactions Will Warm Your Heart
Year of the Rabbit: Canada’s animal shelters urge not to adopt bunnies on a whim