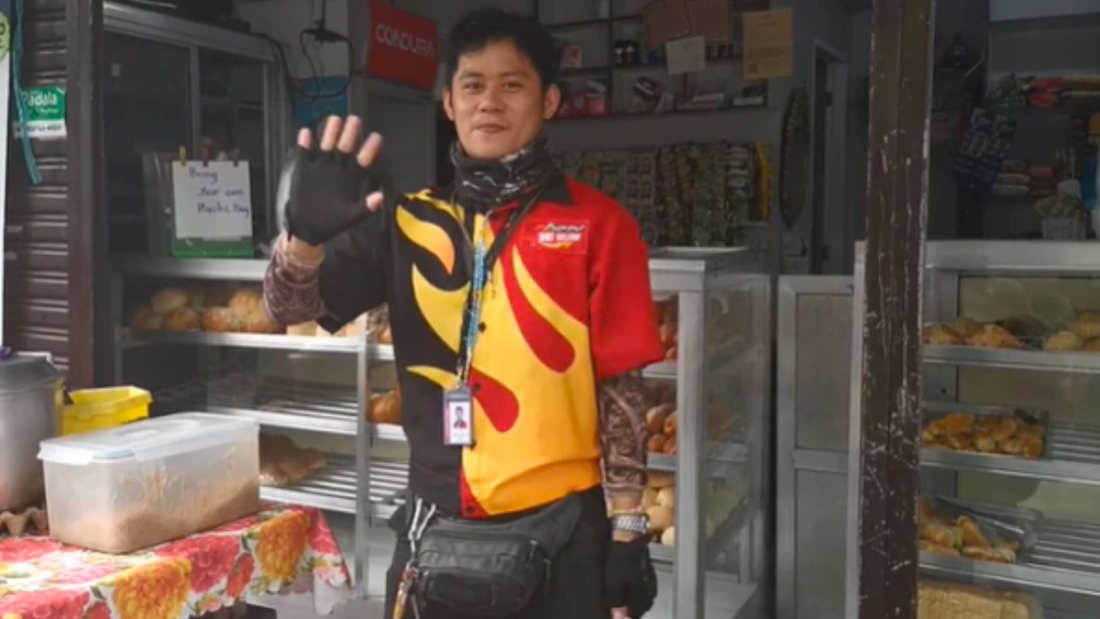 Raymond Papellero has worked for Pizza Hut in Quezon City, Philippines as a delivery driver for over 13 years.

However, it’s his deliveries off hours that have earned him the nickname “good samaritan” and a reward of over 110,000 Philippine pesos.

It all started during the height of the pandemic in 2020. As more and more businesses closed, countless people were left without jobs and no way of putting food on the table.

One day during his deliveries, Raymond noticed two children crying in the street. Thinking that they were hungry and knowing the pangs of an empty stomach himself, he decided to do something about it.

“I saw a family on the street, with two children crying. I thought maybe they were hungry, so I decided to buy bread to give to them. I experienced that same hunger when I was younger, so I know what it feels like,” Raymond said.

What began as one loaf of bread for one starving family quickly multiplied into over 300 loaves, every day, for those in need. It wasn’t long before people noticed.

After several days of Raymond buying up vast amounts of bulk bread from her bakery, owner Raina Ominga had to know; what was he doing with all of this bread? She was shocked when he told her.

“This pizza guy has been buying bulk assorted bread from our bakery for the past few days. So our inner curiosity ends up [with] us asking him if Pizza Hut is giving away those pieces of bread,” she wrote in a Facebook post that quickly went viral.

Raymond told her that Pizza Hut had nothing to do with it.

She continued, “He told us that he saves all of the tips that he gets from his deliveries which he uses to buy bread. Then he gives them away to the people he sees on the streets. We were stunned!”

People online praised his generous act of kindness and called him a “modern-day superhero.”

Raymond doesn’t think of himself as a hero. He just knows what it feels like to go hungry. Growing up, there were days that his family went without eating.

When he looks into the hungry eyes of the people on the streets, he sees himself.

Life now isn’t much easier. Between supporting his 4 kids and his wife and sending money back home to his mother, finances are tight.

But it doesn’t stop him from sharing the little he does have with others who are less fortunate.

“My family is poor. My wife, she’s unemployed and also pregnant. With the money I make every day, I set aside some to buy bread to give away to those who need food. Sometimes the tips from customers are good, so I buy more,” he said in 2020.

And the people on the receiving end of his kindness are certainly grateful.

“When I give them food they end up crying. They even tell me that their last meal was the night before I spoke to them,” he said. “I know that what I am giving is not enough but at least they could survive for a few hours. I hope someone else could give them [food, too].”

The Good Samaritan is Rewarded For His Generosity

When Pizza Hut learned of Raymond’s selfless act, they rewarded him with 10,000 Philippine pesos. Money which he immediately used to purchase bottles of water to give out with the bread.

“There’s no help too big or too small during this time. Kuya Raymond is proof that we are all heroes in our own little way. Thank you for inspiring us!” Pizza Hut wrote in their own Facebook post.

However, they’re not the only ones who recognized the pizza delivery driver’s good deeds.

As soon as they heard about Raymond and his loaves of bread, the Araneta Group of Companies (AGC) stepped up as well, gifting him a cash prize of 100,000 Philippine pesos.

And while the recognition and money are nice, what Raymond really hopes is that he can serve as an inspiration to others. He plans to keep helping the homeless in his community for as long as he can and he hopes others will do the same.

“I hope what I’m doing will inspire other people to also share their blessings with the poor,” Raymond said.

Raymond’s generosity is proof that you don’t have to have a lot to make a difference in someone’s life. You just have to have the willingness and the heart to help others.

Young Struggling Mother Can’t Afford Christmas Gifts for Her Kids – Then, a Concerned News Team Show Up at Her House

Kentucky Woman Gets Unbelievably Lucky at Her Office’s Christmas Gift Exchange — Now She Can Afford to Send Her Kids to College
Deaf Domino’s Employee Delivers Pizzas on Foot After His Car Breaks Down – In Return, He Gets a “Tip” of $12,000
All the Things I Didn’t Tell the Men I Dated Because I Was Afraid
Why I Didn’t Trust Myself to Make Decisions (and What If It’s All Okay?)
Femcels: Inside the enigmatic subculture of involuntary celibate women