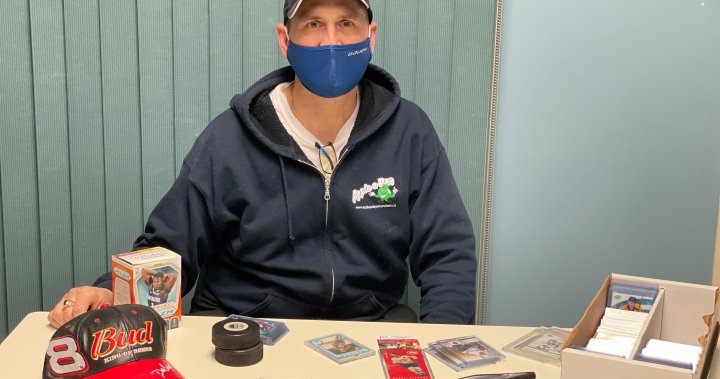 The COVID-19 pandemic has revived an old hobby that is turning out big profits for some people, according to a Riverview, N.B., sports card collector.

“I have just never seen the value of cards be this high ever,” said Tim Marney, who has been collecting sports cards since he was a child in the late 1970s.

While many kids were putting hockey cards in the spokes of their bicycles, Marney said he saw money-making potential even as a boy.

“My father used to always say ‘why do you need to have 20 or 30 of this person,’ and I said ‘they are going to be worth some money someday, dad,’” he said.

He was right. Marney said he was able to put himself through university by selling some of his stock.

But even he is blown away by the value some cards are fetching on the market amid the pandemic.

In December, a Wayne Gretzky rookie card — rated as a 10 on the card grading system — sold for US$1.29 million.

1:57
Saskatchewan man looking to trade up from deck of cards to Tesla Cybertruck

Brad Hartling, who represents Professional Sports Authentification Canada, the company that grades sports cards in Canada, said the value of some higher grade cards has increased 700 per cent in the last year.

He said the spike is being driven by people with lots of money to spend and fewer places to spend it, due to COVID-19.

He said the price tag on many of those high-valued, high-graded cards are out of reach for the average person.

But Marney said you don’t have to be rich to get in on the action. He said that even the non-graded imperfect cards that people may have hidden in boxes under their beds are fetching impressive prices when sold online.

“People being locked up and cooped up and just opening their old trunks and finding their childhood,” and by selling those cards they could possibly find some retirement funds, he said.

Marc Juteau is the founder of a sports card and memorabilia online auction based in Quebec, called Classic Auctions.

He said he was forced to shut down and lay off staff amid the first few weeks of the pandemic, but he has now hired everyone back and business is booming.

“We are some of the lucky ones. Everybody has kept their jobs since the government let us back in and everybody is really busy because of this sports memorabilia frenzy,” said Juteau.

Kentucky Woman Gets Unbelievably Lucky at Her Office’s Christmas Gift Exchange — Now She Can Afford to Send Her Kids to College
How I Stopped Feeling Embarrassed and Ashamed of Being Single
Why I Didn’t Trust Myself to Make Decisions (and What If It’s All Okay?)
How a social media group dubbed Mom Jeans is helping people fight inflation
The two kinds of productivity advice