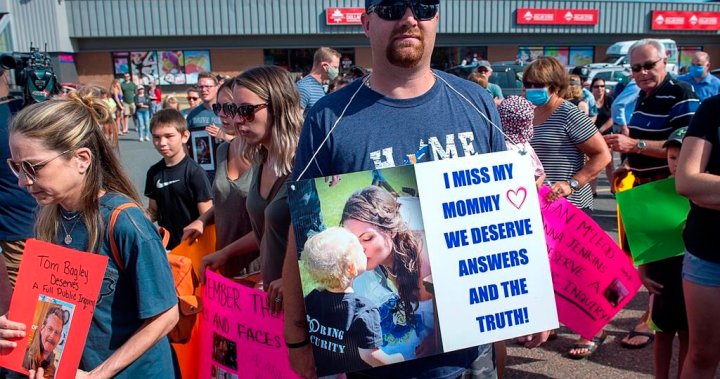 Two university students have walked 150 kilometres between memorial sites of people who died in this year’s deadly mass shooting in Nova Scotia, turning their journey into a fundraiser for victims’ children.

Twenty-year-old Adrian Delli Colli and 19-year-old Ireland Thurler began their walk on Thursday in Portapique, N.S., at a community hall near where the shooter’s rampage began on the night of April 18.

They have pulled a wagon filled with 23 packages of tulip bulbs, one for each of the victims, including nurse Kristen Beaton’s unborn child.

The flowers have been distributed to community members along the way for planting in memory of those who died.

Read more:
Amidst a tough and sad year, a Halifax choir creates a concert of communal lament

Delli Colli, an American studying recreation management at Dalhousie University, says he’s hoping to raise about $10,000 to start scholarship funds for the surviving children and for the Portapique Community Hall.

The initial goal was $1,000, but response along the route has left the two walkers pleasantly surprised as donors have dropped cheques into their cart and e-transferred them funds.

“I decided to do this because I believe true education comes from chasing discomfort and following what intrigues you,” said Delli Colli in an interview on Sunday in the final hours of the walk.

“I wanted to turn what is a traumatic event into an opportunity for the survivors’ children to study and follow what they’re intrigued about as well.”

He added that walking is a simple form of exercise that reduces stress and opens people up to having conversations.

“I always say in a five-kilometre walk you’ll make a new friend, and it was fun to field opinions and make connections while doing something fitness oriented,” he said.

A wide cross-section of people were killed by the shooter, including two nurses, two correctional officers, a family of three, a school teacher and a RCMP officer.

The two walkers were met in Debert, N.S., by a group that included Nick Beaton, the husband of Kristen Beaton, and their three-year-old son.

Thurler, who is studying law, justice and society at Dalhousie University, said encountering a victim’s family was a highlight for her.

“Nick (Beaton) was saying he hopes it will bring attention to his communities that remind us of the positive things there, so that they aren’t solely remembered for the shooting,” she said.

Delli Colli said he was initially worried about triggering painful memories, but has instead found he’s opened up the possibility for people to talk about both losses and potential ways forward.

“It’s showing we care about them,” he said.

This report by The Canadian Press was first published Nov. 8, 2020.

How to Un-Stub Your Toe on the Nail of Life | Eric Bailey Motivational Speech | Goalcast
Sweet Revenge: Woman Wins Lottery Jackpot After Husband Leaves Her for Best Friend
Haute couture goes ‘surreal’ and upside-down at Paris fashion show
Woman Finds Her Elderly Neighbor Living in a Destroyed House – Decides to Takes Matters Into Her Own Hands
This Is What Self-Care Really Means, Because It’s Not All Salt Baths And Chocolate Cake