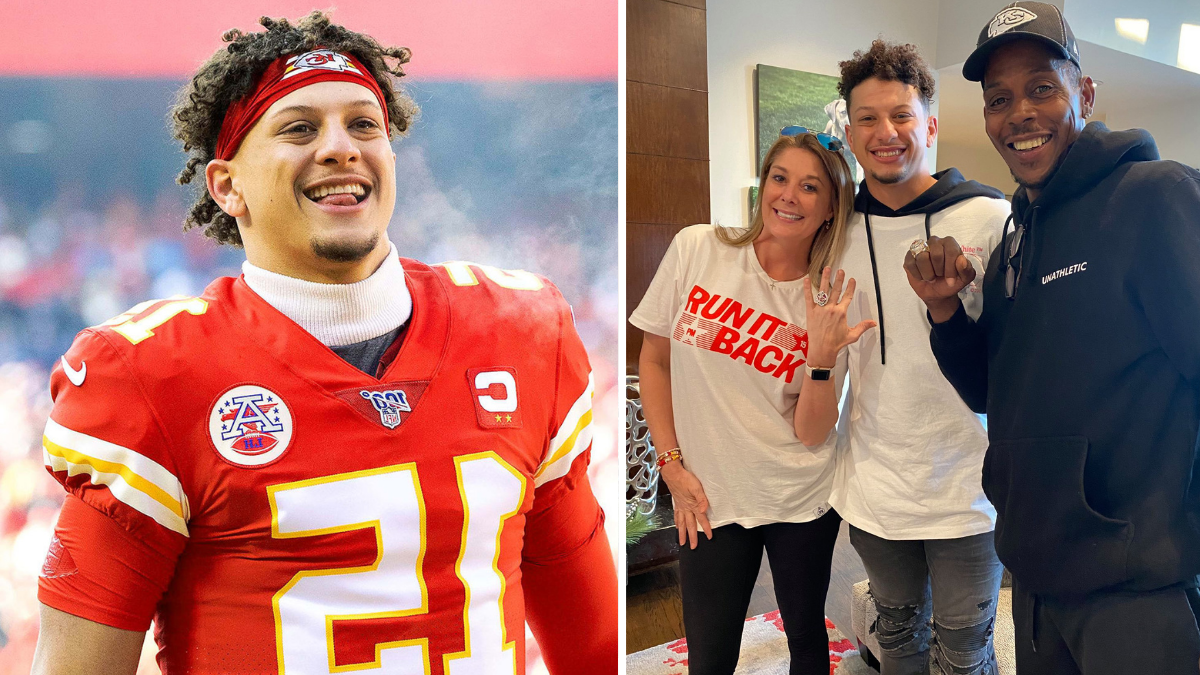 With all due respect to Tom Brady fans, Patrick Mahomes is the current face of the NFL.

The Texas native burst forth on the scene in 2018 when he made history by throwing 50 touchdown passes and 5000 yards over the course of one single season — a record he shares with Peyton Manning. He followed up his initial success by leading the Kansas City Chiefs to an incredible victory at Super Bowl LIV. If that wasn’t enough, he carried the team through to yet another Super Bowl the very next year, though they ended up losing to the Tampa Bay Buccaneers 9-31.

Patrick also scored one of the biggest, most lucrative deals in sporting history by signing a contract extension worth $503 million. It’s not just his career that’s been flourishing beyond belief — the 25-year-old became engaged to his high school sweetheart Brittany Matthews on September 1, 2020, and the two welcomed their baby girl on February 20, 2021.

An inside look at NFL star Patrick Mahomes’ family

Patrick Mahomes’s life is a picture of humility, passion, work ethic, and stability. Yet, it’s worth keeping in mind that his early upbringing and family environment weren’t necessarily this balanced. Sacrifices had to be made, differences had to be set aside, and his loved ones had to put their heads down to refocus on the bigger picture. Here’s what we can learn from Patrick Mahomes’ parents:

Patrick Mahomes was born to Pat and Randi Mahomes in Tyler, Texas.

Pat Mahomes Sr. used to be an MLB baseball pitcher from 1992 to 2003 and played for teams like Minnesota Twins, Boston Red Sox, New York Mets, and Chicago Cubs, among others. He played until he was 39 and was inducted into the Sioux Falls Canaries Hall of Fame in 2019.

I always tell [Patrick Jr.]  before every game how proud I am of him and remind him of what my dad Johnny Mahomes used to tell me:  Youll always be successful if you perform to the limits of your ability

Pat Mahomes I to The Shadow League

While interviewed by the Shadow League journal, Pat Sr said that even though he and his son ended up pursuing two different team sports, they were both inspired by “supportive fathers” and an “early burning passion for athletics.” He also shared that he used to take Pat Jr. to the ball field at the age of four and had him trail balls in the company of other baseball players. Young Patrick went on to become acquainted with the likes of A-Rod and Derek Jeter and therefore decided to give baseball a shot.

Though he changed course during high school, Patrick Jr. still incorporated his baseball knowledge into his football skillset. Moreover, he followed his idol, Derek Jeter, closely and learned what it’s like to work hard both on and off the pitch. Pat Sr. also said that his son is a bit of a “gym rat” in how he approaches his training regimen and physicality.

While senior Mahomes has several anecdotes to share regarding his son’s devotion to football, Patrick’s mom Randi has spoken extensively about the quarterback’s shy personality and what it was like to raise him alongside his younger brother Jackson and sister Mia Randall.

Randi was a full-time mother to her two boys as they were growing up. And so, she was able to take a more hands-on role in their emerging careers. Presently, she works as a private events coordinator at Hollytree Country Club.

Before his junior year in high school he came to me that summer wanting to quit football, but I just said you’re going to regret it if you quit.

Growing up, Patrick was an introverted kid, and according to Randi, “he never got excited” about traveling or going to venues like Disney World or Yankee Stadium. His true passion lay in sports, and he used to dedicate every fiber of his being to excelling in it.

Randi said that she knew from the get-go that her son could reach the highest pinnacle of football, even though he doubted himself as a teenager. Patrick even came to her before his junior year and asked if he could quit football, but she convinced him to keep chugging along.

Randi wasn’t just her son’s pillar of support; she was also a source of discipline. She had to ground her son if he ever fell into a bit of trouble. Lastly, she taught her sons not just to be humble about their success but also to be polite and respectful to other kids. For example, she instructed Patrick to say ‘Hi’ every day to any kid that sat by themselves or seemed lonely.

I am proud of the football, but the family part of it–I’m way more proud and that`s something that I definitely don`t get enough of […] I don`t think it`s really hit me because he’s still my son.

With his mother being White and his father Black, Patrick reckoned with a biracial identity growing up. During the George Floyd protests, Mahomes spoke up about his experiences and said that while he personally hasn’t been discriminated against due to his skin color or ethnicity, he condemns the “senseless murders” and hopes for a world where no one has to “experience these tragedies.”

Patrick’s parents divorced when he was 11, but they still remain “best friends”

Pat and Randi had gotten married at a young age. Their sons Patrick and Jackson were born in 1995 and 2000, respectively. In 2006, the parents decided to divorce, leaving their sons splitting their time between each parent’s home for the rest of their childhoods. Randi also welcomed another daughter Mia in 2011; the father’s identity has not been disclosed to the public.

The year following the divorce had been a challenging one for the Mahomes. Randi described this year as “the most difficult of [Patrick’s] life.” Eventually, Patrick started making friends through sports, becoming more outgoing by the time he was in high school. Even though the brothers primarily lived with their mom, Pat Sr. would always be “at school, at practice, at every game,” said LaTroy Hawkins, Patrick’s godfather and ex-MLB pitcher.

Pat and Randi continue to be on amicable terms and support their son the best way they can. They attend all the industry events alongside Patrick Jr. and even sit in the same suite for the Chiefs’ games. They reportedly call each other “best friends” even today.

Their unity and togetherness in the face of their fraught history demonstrate the true power of parenthood. Patrick Mahomes can’t solely be credited with his illustrious career. He’s likely got a cohesive support structure guiding his decision-making, helping him through the ups and downs, and keeping him grounded amidst the chaos and the widespread fame.

Pat and Randi both recognized the immense talent demonstrated by their son. They knew that they had to overcome their differences to raise an athlete capable of taking the world on its shoulder and becoming a No.1 athlete in his position. Patrick’s fiance Brittany without a doubt, provides a considerable amount of support, encouragement, and guidance, but the parents have been nurturing his talent from day one.

Never turn away from your loved ones

Patrick’s fortunate enough to have the loveliest parents inspiring each and every one of his moves — both on and off the pitch. We might not be as lucky as him to have both parents in the picture, but we’ll surely have people that love us and support us no matter what. We have to keep those loved ones in mind and ensure that we do everything we can to do right by them.

Parenthood is a continual struggle, but if you can prioritize your child time and again, you’re winning the battle. Your child’s wellbeing should be your biggest concern; everything else can be negotiated or compromised in favor of your child. Not that parents shouldn’t pursue their own dreams or interests — it means that all other problems become trivial by default. Pat and Randi Mahomes exemplify what it’s like to throw your differences away in order to stand behind and lift your son. If they can approach parenthood with such a bright attitude, it’s possible for just about anyone.