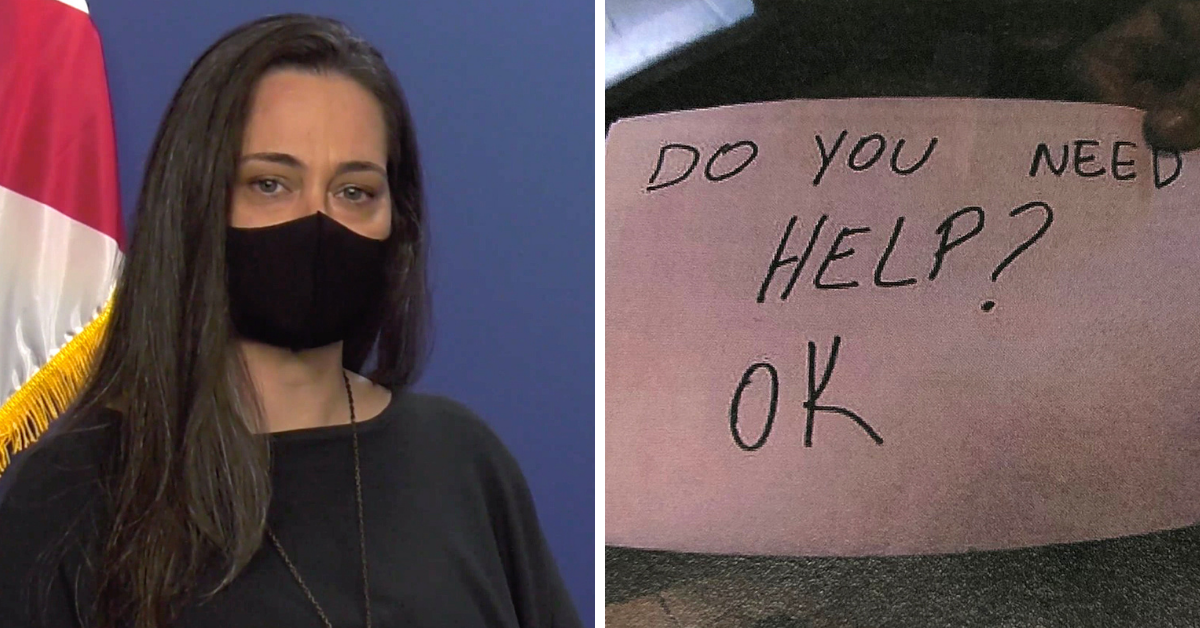 When an Orlando server saw a boy forbidden from eating by his guardians and with a scratch between his eyes, she decided to act.

Waitress Flavaine Carvalho was serving a table in Orlando when something strange happened — the two adults said their child wouldn’t be ordering anything from the restaurant.

When Carvalho looked closer, she noticed a scratch between the boy’s eyes and bruises on his arm and face. As a mother herself, Carvalho knew the boy was in trouble.

So she wrote “Are you OK?” on a sign and showed it to the boy at an angle where his parents couldn’t see it.

At first the boy shook his head ‘no.’

But she told ABC local WFTV that she “knew it that he was afraid.”

So she wrote another sign that read: “Do you need help?”

This time, the boy nodded ‘yes’ and the waitress called her boss for advice. Shortly thereafter, the police were called to the scene.

SEE SOMETHING SAY SOMETHING: An Orlando waitress saw a family withholding food from a boy at a table. She noticed bruises on his body and created this sign to secretly ask the child if he needed help. When he signaled “Yes” she called us. The stepfather & mother were arrested. pic.twitter.com/hJNT1nm0vI

The boy had been tortured

When the boy was interviewed by detectives, he told them his stepfather punched him and beat him with a wooden broom and a back scratcher. Horrifically, the boy also said he had been hung upside down from a doorframe by his ankles and strapped to a furniture dolly.

When the boy rolled up his sleeves, Police said he winced in pain due to bruises that covered nearly his entire body.

Police also said the child was 20 years underweight, likely due to his parents withholding meals from him.

“To be honest what this child had gone through was torture,” Detective Erin Lawler told WFTV. “There was no justification for it in any realm of the world. I’m a mother and seeing what that 11-year-old had to go through, it shocks your soul.”

After learning more of the story, police arrested Wilson again on multiple counts of aggravated child abuse and neglect. And when the mother, Kristen Swann, admitted to being aware of the abuse and failing to seek medical care for him, she was arrested on two counts of child neglect.

The couple’s other child, a four-year-old girl, was taken into custody by the Department of Children and Families, though there was no evidence that girl had been abused.

The waitress may have saved two lives

Police credited the waitress for acting quickly and said she may have saved the lives of the two children.

“This could have been a homicide situation if she had not have intervened,” Orlando Police Chief Orlando Rolon said.

“The lesson here for all of us is to recognize when we see something that isn’t right to act on it… This saved the life of a child,” Rolon said.

The restaurant’s owner, Rafaela Cabede, said that her employee’s bravery should encourage others to do something if they see something troubling.

“We know when we see a situation that is wrong, we know what’s the right thing to do,” she told WFTV.

“We know that speaking up is the right thing to do. But it takes more than acknowledging it. It takes courage.”

Her boss is right. What Carvalho did took courage, and we don’t always have that level of boldness in us. But when we see how much terror this boy was going through it’s unquestionable that her bravery paid off.

This story is also an important reminder that being wrong and potentially causing awkwardness matters way less than ignoring your gut when it tells you a situation isn’t right.

It Takes One Person To Make You Feel Like You Matter | Kyle Scheele Inspirational Speech | Goalcast
How to Be Intolerant of Dysfunction | Josh Shipp | Goalcast
This Year, Let Go Of The People Who Aren’t Ready To Love You
7 Ways Childhood Trauma Shows Up in Your Romantic Relationships
This Is What Self-Care Really Means, Because It’s Not All Salt Baths And Chocolate Cake