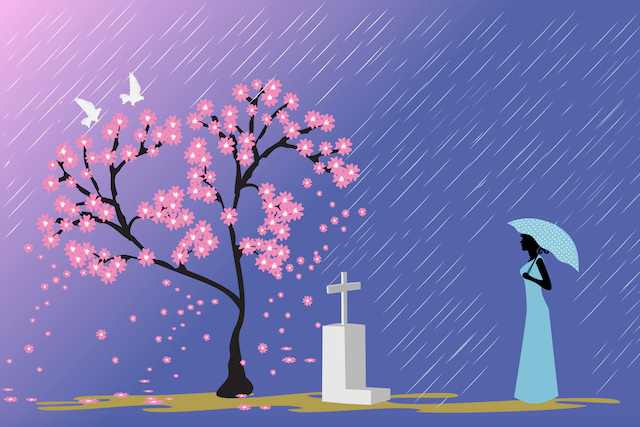 “The song is ended, but the melody lingers on.” ~Irving Berlin

I never went for any of my grandparent’s funerals as a young child, and honestly, I was secretly glad that I didn’t. I was too young to comprehend what death felt like, and I don’t think I had the strength in me to do so. So, when I heard about their deaths, I told myself stories that they had gone on an extended vacation and were having loads of fun, and hence we couldn’t see them.

This story played in my mind all through the years, and that’s what kept me moving on. But deep inside, I knew I had an intense fear of death and couldn’t stare at it in its face.

But recently I had to face it when I went to a funeral for a colleague who was like a mentor to me. His sudden and untimely death was like a punch to the gut.

After his funeral, we went into lockdown, and it felt like the whole world had gone into mourning. It felt as though his death made life come to a standstill. That’s the kind of impression D had on me. My head went reeling into a state of shock, and I couldn’t tell quite what had just happened and why.

You see, DM was a magnanimous personality. He was full of life, compassionate, caring, planned, organized, and all of sixty.

He was radiating with good health, till one fateful day in September he suddenly suffered a stroke. But he fought like a tiger and was soon on the mend. I could picture him coming back to work at least at some level shortly. The stroke took him by surprise as well, for he was quite health conscious and very mindful of his eating habits, etc.

I always thought I would see DM enjoying retired life, spending it golfing, running charity events, enjoying a good karaoke, singing, entertaining, and spending time with the people he loved. Amidst all his fun, I thought he would still be part of the business as a wise sage. But my dreams were shattered when in January, he suffered some further complications.

I didn’t think much of it, because had fought like a tiger before and I was sure he would do it again. But it seemed that fate had other plans and took him from us on the 11th of March.

I could not quite comprehend how or why that happened. It was death rearing its ugly head once again. This time no story could tell me otherwise. I saw no escape because DM and I worked together, and I would miss his presence at work. No amount of storytelling could keep me from facing the truth. He had died, and there was nothing that I could do about it. I had to face this truth.

I couldn’t bear the thought of being back in the office. The idea repulsed me. I was not sure I would be able to cope. But I had to because we were going into lockdown, and I had to wrap up to start working from home. Every time I went to the office I could still feel his presence there. My stomach would churn.

I found it challenging to come to terms with his death. How would I get over it?

I had met DM at a time in my life when I was feeling my lowest. My husband was abroad then, and my kids were small.

I remember the interview. It was a mortgage admin job, and I was overqualified for it. But the work timings and the flexibility that the position offered fit into my grand scheme of things. And the fact that it is was in mortgages, something that I have been doing for many years pulled me toward the job.  At the interview, something told me that it was going to the best decision of my life.

We worked together for two years, and during that time, I realized that we were similar in many ways.  DM was quiet, private, friendly, and concerned. Probably because our birthdays were just a day apart, we understood each other even without talking.

A year later, when he and my husband decided to partner together, I was quite happy because DM was not only trustworthy, but he was also a veteran in his field, was honest and had a brilliant reputation.

When he passed away, I grieved silently. I kept listening to the song “Memories” by Maroon 5, and something about the lyrics made feel that the singer had written the song for him.

As I got dragged back into the mundane life I, realized that there were two things that I couldn’t come to terms with about D’s passing.

The first was, that to me, DM represented values like honesty, courage, resilience, hard work, kindness, compassion. I always thought that those values were timeless, immortal, and invincible. But with DM’s death, I felt those values got cremated with him. I grieved for those values because I too hold on them very dearly.

The second reason I grieved was because I felt that life didn’t allow him to sit back relax and have fun, not have a care in the world, and spend time doing the things he loved.

But as I pondered and reflected more on what it meant, I realized in his passing, in many ways, he handed those values to me as a legacy to carry forward so that I can use it in my life.

I realized that his death also taught me not to wait for retirement or the future to live my life doing the things I love and want to do. Life is way to precarious, short, and precious for that. We will never know when our time will come, so we must use our time on earth well doing the things we love.

With that, I realized the person we love or respect never leaves us. They always remain with us in spirit, through memories, in the legacies, lessons, and values they leave behind, just like DM did for me.

What legacy has your loved one left for you? They must have indeed left something behind. They leave it so that you can carry forward the excellent work they started. It takes time, patience, and courage to see that, and it might be hard when you’re deeply enmeshed in grief. Feel everything you need to feel first, then ask yourself:

What was important to them? What values did they uphold? What did you admire about how they lived, and how can you embody this in your own life? What can you learn from their choices—the ones they made and the ones they didn’t?

Jamie Anderson wrote that grief is just love with nowhere to go. So when you’re ready, put all that love into honoring the message they’d want to leave behind.

As I reflect on what my grandparents would have wanted to leave me, I realize it was to live my best life possible. I am ready to carry their torch ahead! What about you?

Lana likes to inspire people to live life on their terms, by beating fear, doing the things they love, and becoming the highest version of themselves. She;s the founder of The return of the Lion Queen where she strives to make people believe in themselves. Besides blogging, she is a mum, a Finance Professional, and a book lover. To know more about Lana, you can visit her at thereturnofthelionqueen.com and on Facebook, Instagram, Pinterest.

‘Gen Z yellow’: Next ‘it’ colour or marketing ploy?
Beyond Dry January: 5 Benefits of Extending Your Break from Alcohol
The Choice We All Have , But Only a Few Apply It | Joe Dispenza
Detroit Couple Turn Vacant Lots to Bee Farms – Including the Childhood Home of One Legendary Rap Superstar
How to Make Things Better When It Seems Like Everything Is Going Wrong