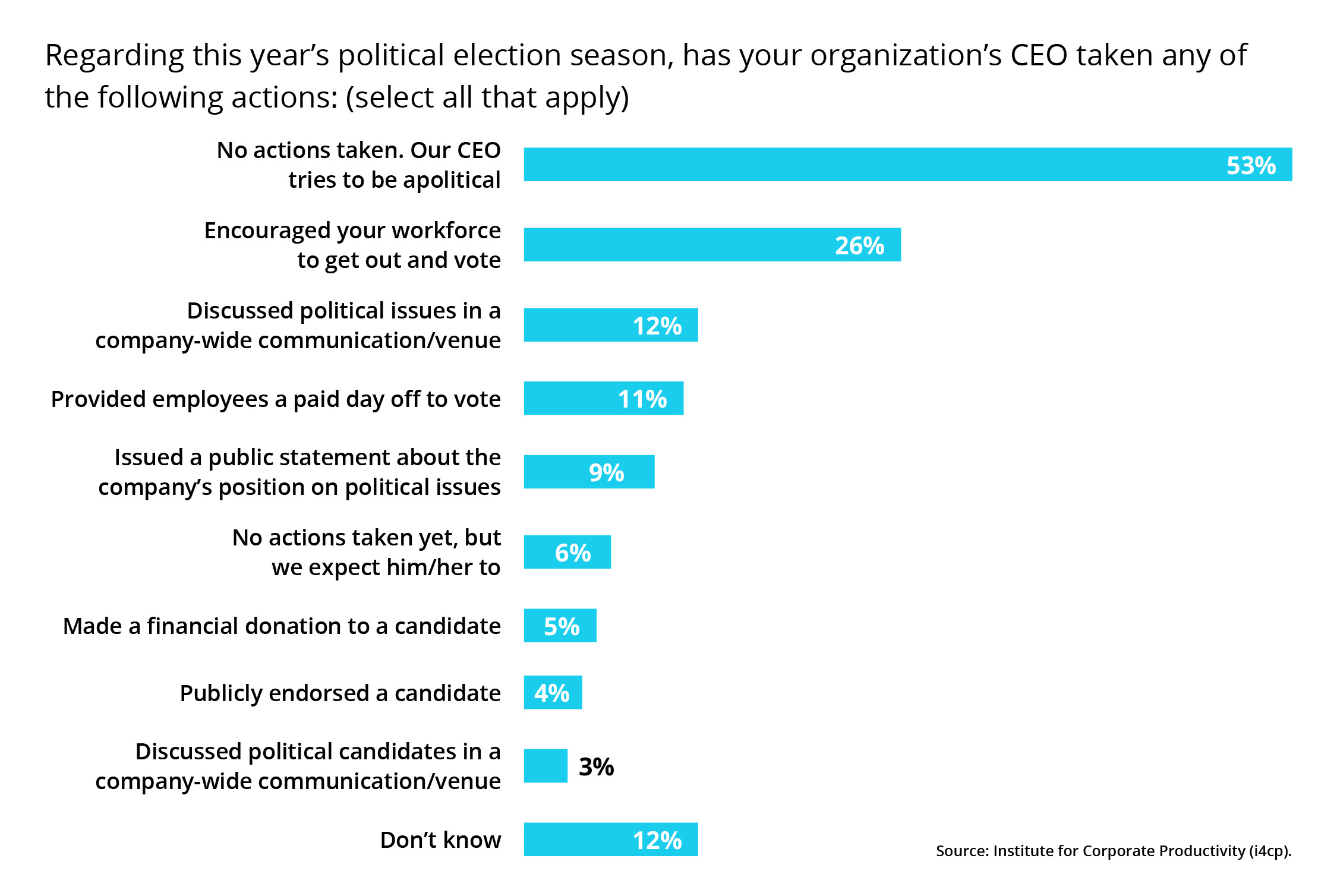 Will your organization offer U.S.-based employees time off
so that they can cast a ballot at their local polling place on Election Day
(November 3, 2020)?

i4cp members Ecolab, Abbott, Danone North America, and
others are among over 1,000 employers (and counting) that have publicly pledged
to promote voter turnout by giving employees the time and tools they need to
exercise their right to vote in next month’s general election.

The time off to vote pledge (of which i4cp is a proud
participant) is being promoted by Time To Vote, a non-profit organization that describes itself as “a
nonpartisan effort for companies that want to contribute to the culture shift
needed to increase voter participation in our country’s elections. We’re led by
CEOs who are interested in increasing voter participation.”

The push to form this coalition of employers is fueled in
part by the fact that the U.S. has the lowest
voter participation rate in the developed world—in the 2016 presidential
election, 43% of eligible voters did not participate.

Among the most common reasons people cite for not voting is
that they are just far too overwhelmed by the demands of work, family, and life.
The surreal circumstances of 2020 only compound these challenges and add to the
very real concern that eligible votes who don’t vote by mail will not make it
to the polls.

While a recent
i4cp pulse survey on politics in the workplace found that 26% of the 300
professionals polled reported that their CEOs are encouraging employees to vote,
few (around 11%) are providing paid time off to their workforces to do so.

Policies on time off for voting obviously vary. For example,
at the Estee Lauder Companies, both full and part-time employees will have a
half-day of paid time off in order to take part in voting, whether this is to
vote, volunteer as a polling worker, or engage in other election-related
activity on November 3rd.

The same is true at Verizon—the telecoms company offers up to four hours of paid time off
for its U.S.-based workforce on Election Day—important especially because
COVID-19 precautions and restrictions will present new challenges to voting
this year, CHRO Christy Pambianchi
recently told HRE.

“Giving our team members the day off to vote has never been
more important or meaningful,” says i4cp’s CEO Kevin Oakes, who declared
Election Day 2020 a companywide paid holiday to ensure that employees have time
to participate fully in the Democratic process.

While many states in the U.S. require by law that employers
give workers time off to vote (paid or unpaid depending on the state), some
organizations are doing so regardless and going a step further to explicitly tie
their time off to vote polices to their diversity, equity, and inclusion
efforts.

An example of this is Cisco, which recently published its
strategy, Cisco
Social Justice Beliefs and Actions, which pledges to take action
to advance social justice and diversity, equity, and inclusion globally to
include providing employees with up to one business day of paid time off to
vote in major country elections across the world.

Old Navy is encouraging its 50,000 retail employees to get
involved in the democratic process—literally. The retailer will pay store
employees who serve in their communities as poll workers this year through its
partnership with the Civic Alliance and Power the Polls. The company
said employees will also be eligible for additional compensation from their
local jurisdictions for helping to close the staffing gaps at polling places.

Among i4cp’s member community, the following organizations
have signed the Time to Vote pledge so far:

Woman Is Afraid of Traveling on Plane – Flight Attendant Does Something That Brings Her Fellow Passenger to Tears
If You’re Feeling Judged: One Thing You Need to Understand
Kentucky Woman Gets Unbelievably Lucky at Her Office’s Christmas Gift Exchange — Now She Can Afford to Send Her Kids to College
The World’s Best Blind Mountain Biker | Brian Bushway | #shorts
All the Things I Didn’t Tell the Men I Dated Because I Was Afraid