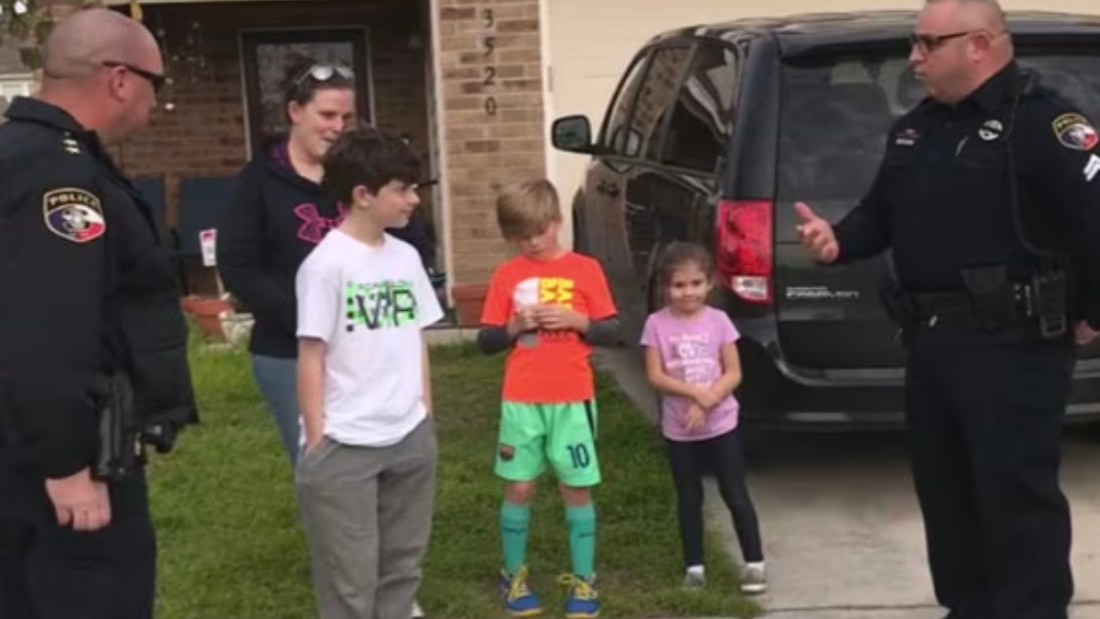 Skateboards, roller skates, tricycles, and bicycles are some of our main means of transportation before we get our driver’s licenses. For most of us, they are probably the cost-effective, healthy transport options without having to get a driver’s license.

And imagine if our favorite bicycle breaks midway while we are cheerfully riding it to a friend’s house, to school, or to get groceries. Imagine if we were a kid. Devastating.

Unlike the broken helpless situation we just imagined, this Texas kid had local cops come to his rescue.

Daniel, a young teen, was pushing his broken bike as he walked along the sidewalk. His bicycle appeared to have had a broken chain situation when we has returning home from school. Two police officers of the Selma Police Department saw this young man in his unfortunate afternoon ordeal.

Chief Padula and Cpl. Ludy stopped their police car and had a small chat with him. Impressed by this kind young kid’s demeanor and politeness, they decided to help him fix the broken chain.

They spent a solid time trying to detangle the chain and hinge it right. The officers also noticed that the bike “had seen better days,” and was not in top condition.

With quick temporary fixes, they saw Daniel ride it off to his house. The officers couldn’t leave it at that. They were in awe of Daniel because he was polite, articulate, respectful, and kind throughout the encounter. The officers found him to be “a pleasure to chat with”.

The pleasant chat with Daniel revealed that he usually rides his bike everywhere, especially to commute to school. So they together decided to treat a kind polite sincere kid with something more than a temporarily fixed old used bike.

The two officers, Chief Padula and Cpl. Ludy surprised Daniel with a brand-new bike. When the officers knocked on his door, he and his parents were confused. The officers begin the conversation by thanking the kind kid for the good chat they had that day.

RELATED: Neighborhood Kids See a Boy Struggling to Ride a Bike – His Mom Catches Them Doing the Unbelievable

The cops slowly reveal that they had a surprise for him and that they replaced his bike. This good news made him smile wide, and the kid beamed with joy. They walk him to the car to unload the bike.

Playfully, one of the officers asks Daniel, whether it would be okay if the bike was all pink. Daniel was so happy that he did not pay attention to this question. The officers then revealed the bike that was not pink at all. Even before they ask him whether he liked the bike, Daniel is seen climbing it and adjusting to it.

Off he went with his new bike with tough wheels, and a firm grip, smiling all the way. The officers were elated to see the kid be this happy with the surprise, and to “spread joy to the citizens”.

Public service at its finest!

Hero of the Week: This Man Is Rescuing Street Cows by Driving Them to Safety on the Back of His Motorbike

7 False Beliefs That Will Keep You Trapped in Your Head Forever
Food inflation: Shoppers turn to saving hacks long used by older Canadians
Woman Finds Her Elderly Neighbor Living in a Destroyed House – Decides to Takes Matters Into Her Own Hands
Year of the Rabbit: Canada’s animal shelters urge not to adopt bunnies on a whim
Parents issue warning after teen dies from inhaling aerosol deodorant