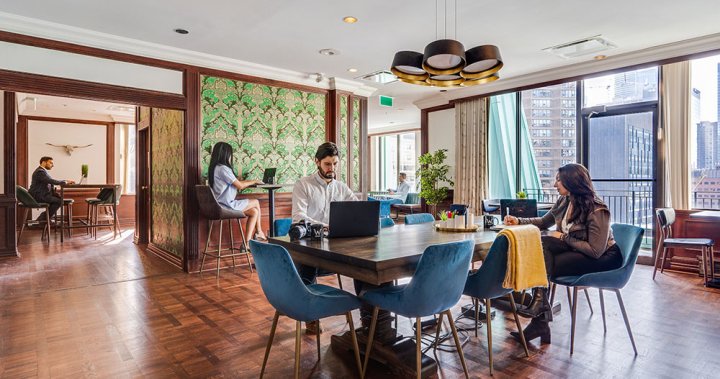 As COVID-19 vaccinations roll out across Canada and case counts are waning in many parts of the country, businesses and their employees are cautiously poking their heads out of work-from-home setups and wondering what kinds of offices — if any — are waiting for them after the pandemic.

A number of major companies have made their intentions clear already, setting the tone of the conversation in North America. JPMorgan Chase has mandated a full return to the office for the U.S. bank’s employees; Ottawa-based e-commerce giant Shopify has meanwhile abandoned its offices in favour of a remote-only workforce.

But as vaccine protection increases and the debate rages over the future of work, some companies are finding opportunity in playing the middle ground with a more “flexible” approach to the office — through co-working.

1:52
64% of employees in downtown Toronto comfortable returning to their office: survey

64% of employees in downtown Toronto comfortable returning to their office: survey – Mar 2, 2021

When Shopify announced in 2020 that it would vacate its original headquarters at 150 Elgin St. in Ottawa, a co-working company called The Corporate Centre leapt at the chance to take over a few floors.

The company announced in April it would open a new location in the downtown Ottawa tower, suddenly opening up one of the city’s most well-known office spaces to all comers.

It was an opportunity not to be missed for Linebox Studio, an architectural firm with a long-standing connection to Shopify’s old offices — after all, it designed them.

The 150 Elgin St. offices were designed to promote collaboration and encourage interaction, Reeves says, the kinds of chance run-ins that co-working companies often advertise as a feature, not a bug, of the model.

Co-working or shared workspaces vary from office to office, but the typical format sees a large space occupied by a number of companies but fit-up and managed by a single provider.

Some spaces are wide open with a series of long desks, some offer semi-private offices. Many providers target standalone remote workers or fledgling startups looking for a like-minded community.

Terms on co-working agreements are typically less restrictive, in some cases a year or less, than traditional leases with a commercial landlord.

Before the pandemic, Linebox held a lease at an office in Ottawa’s ByWard Market. A return to a long-term lease after months spent working remotely, however, was increasingly unattractive for the company.

The uncertainty around the pandemic, future expansions or contractions of its staff and the desire to bump into people in entirely unrelated fields drove Linebox to start considering co-working as a realistic option.

“We know things are going to change. We know we’re not going to be in the same spot, even in a few years, as we are now. So going into a co-working space also offers the flexibility for us to change,” Reeves says.

Linebox isn’t alone in seeing the upside of co-working and more flexible arrangements.

A survey of more than 2,000 Canadian workers released by KPMG LLP in May showed that a majority of those polled (77 per cent) want a mix of both remote and in-office working models after the pandemic ends.

Leigh Harris, a management consultant with KPMG, tells Global News that the demand for “hybrid” working models could lead businesses down the co-working route.

Not all companies will want to let go of their real estate portfolios in the way Shopify says it plans to, Harris notes. But companies that can get out of a lease that’s no longer making sense for them post-pandemic might be looking for more flexible space in the near term to gauge their employees’ appetites for a return to the office.

“If you’re the owner of massive real estate… you may want to maximize that. If you’re not, and you’re getting out of leases, then you might be re-examining whether or not you want to make investments or maybe scaling it down and seeing what your next move will be,” she says.

One of the world’s largest co-working providers, WeWork, has signaled in recent interviews that it’s fielding a ton of demand for flexible office space in the United States, where COVID-19 vaccinations were outpacing Canada earlier this spring.

A number of co-working providers who spoke to Global News say they’re preparing for a flood of demand in the fall when a larger proportion of the population is fully vaccinated against COVID-19.

Kane Willmott is the CEO and co-founder of iQ Offices, which has an office portfolio including space in Toronto, Ottawa, Vancouver and Montreal.

Willmott said his company has gotten plenty of interest, especially in Ontario and Quebec, from companies thinking about breaking their traditional leases and give co-working a try. The ongoing stay-at-home order in Ontario is holding people back from signing on dotted lines just yet, but he sees brighter days ahead with the lineup of prospects.

“As soon as things open up, this whole pipeline will start to flow through. The levee’s going to break,” he says.

The uncertainty coming out the other side of the pandemic is actually a selling point for the co-working model, Willmott argues.

The demand for a hybrid working style could see companies of 30 employees only require 15 desks in an office per day, if certain employees are only coming into the office a few days a week — if at all.

He says the modular nature of co-working makes it easier for companies to adjust their space needs and scale up or down based on their employees’ interests, which will likely also evolve over time.

“How do you accommodate that if you don’t have flexibility?”

Read more:
These 4 Canadian cities are ranked among top 20 globally for work-life balance

Adrian Joaquin, CEO of Toronto-based Workhaus, says the company has seen a “massive spike” in new leads and requests for tours of its spaces in Toronto, Kitchener-Waterloo and Calgary over the past few months.

He says he’s also looking at the fall as the time when new tenants will lock in terms at Workhaus, confident the model will suit their needs post-pandemic.

Many co-working companies are hoping the next few months see a return to pre-pandemic business levels after more than a year of turbulence. Lockdowns surrounding the COVID-19 pandemic have forced most to close at least intermittently as work-from-home became the norm.

While Workhaus was boasting occupancy rates as high as 90 per cent before the pandemic, Joaquin says those figures took an “immediate hit” in April 2020.

Thirteen months later, roughly 25 per cent of the company’s spaces are taken and Joaquin estimates only 10 per cent of desks are actually filled on a given day.

The pandemic’s impact hasn’t been felt the same across the country, Willmott says. In Vancouver, which has seen less stringent restrictions than Ontario and Quebec, there hasn’t been as much of a slowdown in business.

Since the start of the pandemic, nearly 700 co-working spaces have closed permanently across 30 major North American cities, according to Colorado-based Upsuite, a provider that also tracks trends in the industry. The closures mark a 21 per cent decrease in the total number of providers that Upsuite tracks.

While Willmott and Joaquin both say they had a die-hard contingent of companies that held onto their office space through the pandemic, they also believe that the ease of cancelling a co-working agreement will bode well for the industry’s resurgence.

Not everyone in the industry is so optimistic, however.

February of 2020 was the first break-even month in the company’s history, with the following March primed to be Coworkly’s first profitable month. Then the pandemic hit.

The company’s monthly revenues have since taken hits as deep as 70 per cent at the height of the pandemic lockdowns.

Arar had been expecting prospective clients — particularly from the corporate world — to come and kick the tires at Coworkly, but inquiries have been scarce.

Despite social media campaigns and the health and safety protocols he has in place, Arar believes the fear of the pandemic is continuing to keep clients at bay.

He likens the psychological impact of the pandemic to a “trauma” that he believes will take years to fade away from workers’ minds.

“The scars from this will stay with us,” he says.

Read more:
A workplace resignation boom may be looming. Here’s why

The same KPMG survey that signalled a strong desire to return to the office also listed contracting the virus from an asymptomatic co-worker as a top-three concern for 68 per cent of respondents. Fears over public transit use and business travel were also borne out in the survey results.

Arar says that if this fear remains in even 30 per cent of the working population, it could be enough to kill the co-working industry, which he says requires occupancy levels of 80 per cent or higher to be profitable.

“If your co-working space is only half full, you’re going to lose money,” he says.

Other co-working providers also acknowledge the mental hurdles will be the biggest barrier to full-scale adoption of shared office space.

“People aren’t going to come back until you feel comfortable sitting next to someone for eight hours a day with no mask on,” Joaquin says.


Is the future flexible?

Debates about the future of the office have permeated the pandemic, leading some commercial real estate companies to reconsider how their portfolios are used.

A BMO Economics report released at the end of April said the commercial vacancy rate in Canada reached 14.6 per cent in the first quarter of 2021, the highest levels in a quarter-century. Greater Toronto’s office vacancy rate hit 12.4 per cent, its highest levels since 2005, while Metro Vancouver maintained the lowest vacancy rate among large cities in the country at 6.3 per cent.

But the west coast isn’t immune to the flexible shift. In Vancouver, the Arpeg Group of Companies is timing its first foray into co-working for the fall with its new brand, And-Co.

President Drew Ratcliffe says that the pandemic has only “accelerated” the shift in what companies are looking for in their future office agreements: shorter-term leases and flexible office space that takes the onus of fit-ups and other overhead costs off the tenant.

“It’s probably accelerated that reality for most people,” he says. “Flexibility, I just don’t see it going away.”

Willmott agrees, and likens the more on-demand model for office space to the departure from physical albums of music.

“Co-working is to office space like iTunes was to the music industry. It’s centred around the customer, it’s giving them exactly what they want,” he says. “It’s just a system that is so antiquated. Landlords now are starting to realize that these co-working spaces are what the customers want.”

Despite the rosy picture, Willmott acknowledges there’s still a lot of confusion in the market about what co-working is. He’s planning a summer series to help people try out various shared offices around Ontario for a day.

“There’s a lot of people working from home who don’t realize how easy it is to just pick up for the day and go work in a co-working space,” Willmott says.

In Ottawa, while Arar is also looking towards the fall with hopes of a surge in demand, he remains skeptical that the market will recover quickly enough, if at all, to keep Coworkly afloat.

“We haven’t found enough people who are receptive. And as I say, this business needs big numbers,” he says.

“I’m hoping my prediction is wrong, but I have to be realistic.”

4:20
What Canadian employers can and can’t demand in the post-pandemic workplace

All the Things I Didn’t Tell the Men I Dated Because I Was Afraid
Looking for love? 44% U.S. adults use dating apps to find long-term partners: study
Service Dog Stays at Hospital With His Owner 24/7 — While Nobody Else Was Allowed to Stay
Podcast: What to know about “novelty hunting.”
He Was Fatally Beaten by Memphis Police — Now People Around the World Are Sharing #SunsetsForTyre in His Honor